Difference between Ankle Sprain and Fracture

Key Difference: A sprained ankle is when the ligament is partially torn or fully torn. An ankle fracture is when a bone in the ankle breaks.

Ankle injuries are the most common injuries that people get, especially in sports. The two most common types of ankle injuries are sprain and fractures. Though these may seem similar due to the immense amount of pain that follows, they are different from each other. Sprain is milder compared to fracture. The ankle joint is made up of three bones: tibia, fibula, and talus. The tibia bone is the main bone of the lower leg and makes up the medial or the inside of the ankle. The fibula is a small bone that forms the lateral malleolus, or the outer bump of the ankle. The talus is the top bone of the foot. Injuries happen commonly to these bones or corresponding ligaments. 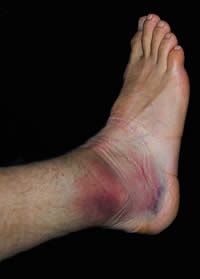 A sprained ankle is also known as twisted ankle, rolled ankle, ankle ligament injury or floppy ankle. This generally means that a ligament is stretched to the point where it is partially torn or fully torn. This is caused by the twisting of the ankle either inward (more common) or outward (less common). When the ankle is twisted it causes the ligament tissue to stretch beyond its capacity to the point where it rips or is on the verge of ripping. An ankle sprain can range from a minor sprain to a major sprain which can require surgery. Depending on how many ligaments were torn or how sever the tear is, the sprain could either heal automatically if the damage is not that great or require surgery in order to treat the ligaments. The severity of the injury also depends on the previous injuries that a person may have had in the past. If the ligament continues to tear it could leave a lingering pain that never goes away. It could also cause the ligament to not heal properly leaving the person to limp.

When an ankle is sprained the effects are immediate, it results in serious pain, swelling and bruising. The area is tender to touch and hurt when pressure is put on it. In more severe sprains the person may hear a pop or a ripping sound of the ligament tearing. Also it will hurt to walk or even stand on that leg. Swelling and bruising also occurs. If it is a minor sprain, a person can alleviate the pain by using over the counter pain killers, keeping the leg elevated and using a cold compress to reduce the swelling. If sprains are more serious, a doctor’s visit is a must in order to determine that no bones are broken. The doctor diagnoses a sprain depending on past injuries, pain, swelling, bruising or getting an x-ray to make sure. Treatment includes a popular anagram known as PRINCE, which translates into: Protection, Rest, Ice, NSAIDs or other painkillers, Compression and Elevation.

Common symptoms of ankle sprain include: 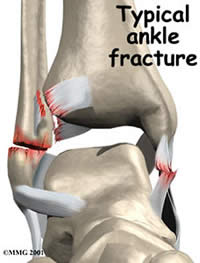 An ankle fracture is the breaking of a bone in the ankle. The three bones, tibia, fibula, and talus are the bones that commonly break as a result of twisting, turning or impact. If the stress of the pressure on the ankle is too great, it will cause the bone to break causing a fracture. In case of twisting and rolling, the fractures occur simultaneously with torn ligaments. The pressure would first tear the ligaments before the bone breaking. A fracture is most commonly determined using an x-ray. A doctor may not diagnose the problem until he sees the breaks in the bone on an x-ray. A fracture is considered a more dangerous problem compared to a sprain, which can heal easily. A fracture takes time to heal and requires the bones to heal properly and needs to be aligned correctly in order keep the person from constant pain or a limping problem. Depending on the severity of the fractures and torn ligament tissues, the person may also have to undergo surgery in order for realignment of the bones.

During a fracture a person may hear the snap of a bone or and feel the bone break. This is usually followed by excruciating amounts of pains, where the person cannot walk or even stand on that particular leg. Swelling, bruising and fluid buildup (pus) is also common during fractures. Also depending on the impact of pressure that was placed on the bone causing it to fracture, it could also result in the bone tearing the skin and prodding out, resulting in blood. Minor fractures only require a cast or splint and over the counter pain medications, while more serious fractures require surgery, cast for recovery and physical therapy to get the muscles and bones get used to movement again.

Symptoms of fracture include: