Difference between Vaseline and Petroleum Jelly

Key Difference: Vaseline is a type of petroleum jelly used for different purposes such as lotion, cleanser, lubricant, etc. On the other hand, a petroleum jelly is a lucid jelly that consists of a mixture of hydrocarbons, which is used as a lubricant or ointment.

Vaseline is one of the most popular household products. It used by many people for different purposes such as skin protectant, lotions, for cleansing, etc. Vaseline is a petroleum jelly based product which is a brand name by Unilever (an Anglo-Dutch Company). Vaseline is such a brand that has a list of many products. Lotions, skin creams, plain petroleum jelly, cleanser, soaps and shampoos are the products named under Vaseline. 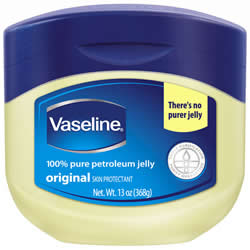 Petroleum jelly is derived from petroleum and is the mixture of non-polar hydrocarbons which is famous for healing the skin and has an healthy effect on the human skin. It is a semi-solid product and is well-known since last century as an ointment.

Robert Cheesebrough first developed the petroleum jelly in the year 1859. After noticing the positive impact of the jelly on skin, including healing minor cuts and burns, he started marketing the product as Vaseline. His company, the Chesebrough Manufacturing Company produced and sold Vaseline until 1987, after which the company and all of its brand were acquired by Unilever.

Vaseline petroleum jelly is one of the least expensive and the most versatile products available. It is very famous for skin care and cosmetic products.

Comparison between Vaseline and Petroleum Jelly: