Difference between Archaea and Bacteria

Organisms are important to our existence as humans and all other living things evolved from them. Organisms can be classified into two categories: eukaryote and prokaryotes. Prokaryotes microorganisms can be further classified into three domains: eukarya, bacteria and archaea. This can become a bit confusing as these two are similar in looks and can often be confused based on look alone, though these are different from each other in many ways. 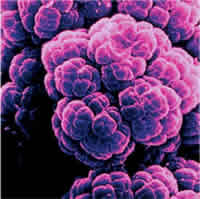 Archaea is a domain of single-celled microorganisms. The archaea were originally classified under prokaryotes as archaebacteria, however this classification is now considered outdated. Archaea is now a proper domain in a three-domain system for a type of single-celled organisms as they have an independent history and has many differences from other microorganisms. Archaea are further divided into four recognized phyla, but many more phyla may exist. The word ‘archaea’ is derived from Ancient Greek ἀρχαῖα, meaning "ancient things". Archaea microorganisms have no cell nucleus or any other membrane-bound organelles within their cells. Archaea were first divided into a separate group in 1977 by Carl Woese and George E. Fox based on the sequences of ribosomal RNA (rRNA) genes. It was originally termed as Archaebacteria and Eubacteria, which was later renamed to Archaea and Bacteria. Merriam Webster defines ‘archaea’ as, “microorganisms of a domain (Archaea) including especially methane-producing forms, some red halophilic forms, and others of harsh hot acidic environments (as a hot spring).”

Archaea is similar to bacteria in shape and size; this is where the confusion stems from, however some archaea have very unusual shapes, such as the Haloquadratum walsbyi organisms have flat and square-shaped cells. Archaea are also the oldest organisms that have been discovered. They range in from 0.1 micrometers (μm) to over 15 μm in diameter and occur in various shapes including spheres, rods, spirals, plates, lobed cells, needle-like filaments and rectangular rods. Though archaea looks similar to bacteria, it has genes and metabolic pathways that are similar to eukaryotes, including having three RNA polymerases. Archaea rely on ether lipids in their cell membrane for survival. Another unique feature of archaea is that they can survive in extreme conditions, such as extremely hot, extremely cold or extremely salty water. Also, archaea cell walls lack peptidoglycan, which is present in bacteria. In most archaea the wall is assembled from surface-layer proteins, which form a rigid array of protein molecules to cover the outside of the cell, similar to a chainmail. Archaea acquire energy from various sources such as sugars, ammonia, metal ions, hydrogen gas, sunlight and carbon, while producing nitrogen, methane, sulphuric acid, etc. as a byproduct. Archaea reproduce through measures such as binary fission, fragmentation or budding. Archaea played and continues to play a huge part in the carbon cycle and nitrogen cycle on the Earth. 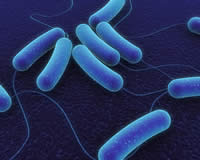 Bacteria are the largest domain of the prokaryotic microorganisms. They are believed to be among the first life forms that appeared on the Earth and are present on most habitats, including residing inside the bodies of humans, animals and plants. It is estimated that there are approximately five nonillion (5×10^30) bacteria on Earth. Though originally bacteria were regarded as plants constituting the class Schizomycetes, it is now classified under prokaryotes. Unlike cells of eukaryotes, bacterial cells do not contain a nucleus and rarely have membrane-bound organelles. The term ‘bacteria’ is the plural of the New Latin ‘bacterium’ and is derived from the Greek βακτήριον (baktērion) and βακτηρία (baktēria), which means “staff, cane” referring to the shape of the organisms that were found at the time. The term ‘bacteria’ was used to refer to all prokaryotes, though it was later changed as additional discoveries found differences among the organisms.

Bacteria are usually few micrometres in length are found in a variety of shapes including cocci, bacilli, vibrio, spirilla, spirochaetes and cuboidal. Bacteria cells are approximately one tenth the size of eukaryotic cells and are typically 0.5–5.0 micrometres in length. The shape of the bacteria is determined by the cell wall and cytoskeleton, which alters and adapts in order to receive proper nutrients, attach to surfaces, swim through liquids and escape predators. The bacterial wall is surrounded by a lipid membrane that encloses and holds nutrients, proteins and other essential components of the cytoplasm within the cell. As prokaryotes, bacteria do not have membrane-bound organelles and hence contain few large intracellular structures. They lack a true nucleus, mitochondria, chloroplasts and the other organelles. They also only have one RNA polymerases.  The cell membrane contains ester bonds, while the cell walls are made of peptidoglycan. Bacteria grow and reproduce asexually through binary fission.

Bacteria are an important part of the planet and play a huge part in recycling nutrients, such as fixation of nitrogen from the atmosphere and putrefaction. Even in extreme conditions, bacteria provide nutrients needed to sustain life by converting dissolved compounds such as hydrogen sulphide and methane. Bacteria can also harm the body by producing a variety of diseases in the humans, such as respiratory illness, HIV, etc. For many ailments, antibiotics are used to rid the body of the harming bacteria. Bacteria also has other uses such as sewage treatment, breaking down oil spills, producing cheese and yogurt, recovery of gold, palladium, copper and other metals.