Difference between Abortion and Infanticide

These days we constantly see the words abortion and infanticide in the news, with a lot of countries now changing their views on both. However, the major confusion arises from the fact that a lot of people are now comparing abortion to infanticide. But, there are huge differences in the two.

Abortion and Infanticide is a commonly debated topic among politics and religion. There are multiple views when it comes to the two, especially Abortion. There are two major groups that are currently taking center stage when it comes to Abortion: pro-life and pro-choice. Pro-life supporters claim that an abortion under any circumstance except when it puts the mother in harm should be unacceptable, while Pro-choice supports that it is the woman’s choice as the pregnancy affects her the most. When it comes to Infanticide, a lot of people are supporters for not killing, while there are some cultural differences that make it okay in some countries.

In simplest terms, the difference between abortion and infanticide is the duration of the process. Abortion is the termination of a pregnancy in the uterus or while the fetus is still in the process of developing into the baby. Abortion can be performed during multiple stages but is safest in the first-trimester which is the first 3 months. After this the risk to the host is considered to increase significantly. The abortion laws in many countries are designed around this – where it is considered legal during the first trimester, acceptable under special circumstances (such as threat to the mother or if the baby won’t live a full healthy life) during the second trimester, and very rare or unadvisable in the third trimester.

Infanticide is the process of killing a newborn after it is already born. There are many reasons as to why someone performs an infanticide including preferring one sex over another, or for sacrificial purposes. In some cultures, sacrifices are still considered acceptable in which case a child is often murdered. However, infanticide these days is used mostly if a woman doesn’t have access to early abortion and chooses to kill the baby because she does not want to raise it or in countries where one sex is preferred over another such as India, China and certain African countries. Countries such as these often end up killing the female baby, preferring to raise a male baby instead. 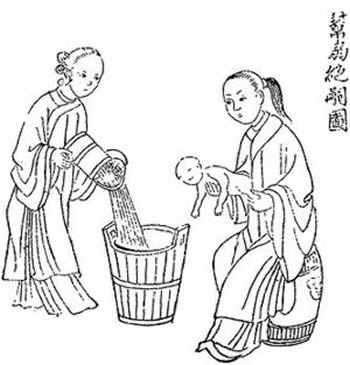 The main difference is between the morale issue which arises where the viability of the fetus is considered. In terms of abortion, if a fetus is viable (which means it can exist without the woman) then it considered to be alive. However, in terms of infanticide, kids are killed because they are unwanted, society pressures for a male child, or even for sacrificial purposes. Where both the words become intertwined is when people determine the sex of the child in order to abort the baby if it is not a preferred gender.

There are many laws that are now being designed around abortion and infanticide. Abortions are requiring woman to wait, asking for doctor’s opinion, etc. In case of infanticide, a lot of countries where females are killed, sex determination of a baby are banned and people who kill newborns are being trialed as murderers.

Comparison between Abortion and Infanticide: