Key difference: A nuclear bomb means a bomb that performs a nuclear reaction; and an atomic bomb is a nuclear weapon that uses the energetic output of nuclear fission to produce massive explosions. 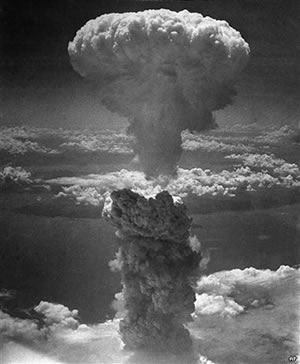 A nuclear bomb is very explosive. It derives its destructive force from nuclear reactions, either fission or a combination of fission and fusion. The amount of energy released by fission bombs can range from less than a ton of TNT upwards to around 500,000 tons (500 kilotons) of TNT.

It uses its nuclear energy to kill lots of people and destroy large areas. It contains a huge nuclear energy which can cause severe disasters and can create obstacles in human life.

Nuclear bomb is a bomb whose force is due to uncontrolled nuclear fusion or nuclear fission. Nuclear weapons are considered weapons of mass destruction, and their use and control has been a major aspect of international policy.

These bombs were dropped on Hiroshima and Nagasaki during World War II in 1945. It created a vast devastation. In addition to the deaths caused by the blast impact of the bomb, many people also lost their lives, due to the radiation spread by the bomb. The effects can be observed till now. The future generations of people have become mentally and physically handicapped due to the radiation spread by these bombs. 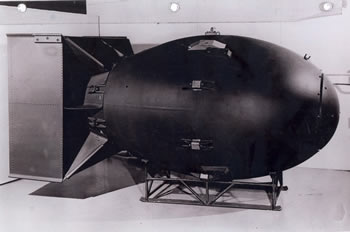 A bomb which derives its destructive power from the rapid release of nuclear energy by fission of heavy atomic nuclei, causing damage through heat, blast, and radioactivity is knows as an ‘atomic bomb.’

Uranium- 235 and plutonium-239 are the isotopes used in atomic bombs. With only 11–33 lb (5–15 kg) of highly enriched uranium, a modern atomic bomb could generate a 15-kiloton explosion, creating a huge fireball, a large shock wave, and lethal radioactive fallout. It also creates devastation like the nuclear bomb. The fission is very explosive, hazardous and can take many lives.

WRONG-The bombs known as "Fat Man" and "Little Boy" which were dropped on Nagasaki and Hiroshima were both atomic bombs.