Difference between Animal and Mammal

Key difference: All mammals are animals, but all animals are not mammals. The drastic feature which separates a mammal from an animal is that mammals have mammary glands, which all animals do not have.

The word “animal” comes from the Latin word animalis, meaning “having breath”. They belong to the kingdom Animalia. Biologically, the word is defined as ‘all members of the kingdom Animalia, encompassing creatures as diverse as sponges, jellyfish, insects, and humans’. 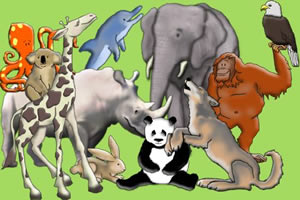 Animals are multi-cellular, eukaryotic organisms of the kingdom Animalia or Metazoa. They comprise of a wide spectrum of species and different categories of animals. They are terrestrial, aquatic, aerial and amphibious in habitats. Their body structure is eventually fixed as they develop and undergo a process of metamorphosis in their lives. They are motile, that is they can move spontaneously and independently. Animals are divided into various sub-groups, including birds, mammals, amphibians, reptiles, fish and insects.

Animals have numerous characteristics which distinguishes them from living-beings. They are eukaryotic and multicellular, which separates them from bacteria and most protists. They are heterotrophic in nature and digest the food in an internal chamber. They also lack rigid cell walls, these feature separates them from plants and algae. Their structure ranges from the tissue type of sponges (Phylum Porifera) and Placozoa, till the fully matured grown type of muscles and the nervous system of humans. Their formation includes many chemicals comprising of hormones, proteins, genes, bones, etc. They obtain the energy from the source of food, which provides them with all the essential and nutritive components necessary for growth. The type of food depends on the type of category of the animals.

Animals reproduce sexually as well as asexually. Nearly all animals undergo some form of sexual reproduction. They have a few specialized reproductive cells, which undergo meiosis to produce smaller, motile spermatozoa or larger, non-motile ova. These fuse to form zygotes, which develop into a new individual. Many animals also reproduce asexually. This takes place through parthenogenesis, where fertile eggs are produced without mating, budding, or fragmentation.

The word “mammal”, is originated from the scientific name Mammalia coined by Carl Linnaeus in 1758, derived from the Latin mamma. They are divided into two subclasses (not counting fossils): 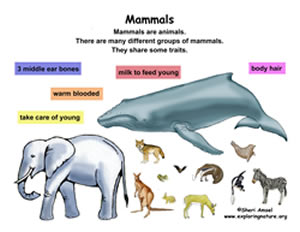 Mammals (class Mammalia ) are a clade of endothermic amniotes. They include the largest animals on the planet comprising of the rorqual whales, elephants (intelligent of all animals) and some primates and some cetaceans. Mammals are warm blooded animals and have a closed circularity system with a sophisticated four-chambered heart. The features that distinguish them from other amniotes are the reptiles and birds which have hair and three middle ear bones. In females, there are mammary glands, and a neocortex (a region of the brain). The mammalian brain regulates the body temperature and the circulatory system, including the four-chambered heart. They have a basic body type of the four-legged land-born animal. Some also with two legs adapted to sea, air and trees.

The anatomy and morphology of mammals includes the system such as:

The reproduction systems of mammals are of at most importance. Most mammals are viviparous, that is they give birth to young ones. However, the five species of the monotreme, platypuses and echidnas lay eggs. The monotremes have a sex determination system, which is different from most other mammals. In particular, the sex chromosomes of a platypus are more like those of a chicken than those of a therian mammal.

Comparison between Animals and Mammals: