Difference between Dwarfism and Cretinism

Key difference: Dwarfism is defined as the condition of being a dwarf. Cretinism is a condition arising from the deficiency of a thyroid hormone, which causes dwarfism and mental retardation. It is present from birth. 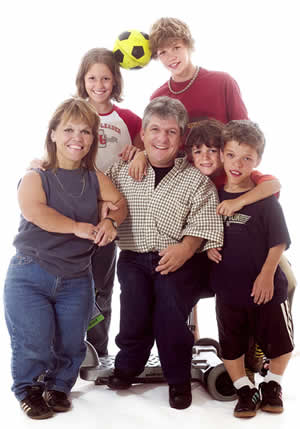 Dwarfism is the condition of being a dwarf. According to Wikipedia, it occurs from a medical condition caused by an abnormal or slow body growth. Both, animals and humans suffer from this condition; in humans, an adult with a height less than 4 feet 10 inches is sometimes referred to as a dwarf. It is a medical disorder. It can be caused by 200 distinct medical conditions. It is usually caused by genetic disorder achondroplasia; it is caused by a mutation on chromosome four. The disorders caused by dwarfism are often classified by proportionality.

People with dwarfism have a wide range of physical characteristics, which vary from person to person. Short stature can be inherited without any coexisting disease. In the absence of a medical condition, dwarfism is considered to be inherited. It is considered that short parents tend to produce short children; however, people with dwarfism may produce children of average height, if the cause of their dwarfism is not genetically transmissible. Another characteristic is disproportionate dwarfism, in which one or more body part is unusually large or small as compared to other body parts. Facial features are often affected and individual body parts may have problems associated with them. In proportionate dwarfism, the body parts are proportional but smaller. Height is below average. Sexual development is often delayed or impaired into adulthood. It may also cause intellectual disability in a person. In case of achondroplasia, mental function is not impaired in any way. However, there are other symptoms which can affect the cranial structure and growth of the brain, severely impairing mental capacity. Unless the brain is directly affected, there may be or may not be the chance of mental impairment that can be attributed to dwarfism. There are few psychosocial limitations of society which may be more disabling than the physical symptoms, they are as follows:

Dwarfism can result from a myriad of medical conditions, each with its own separate symptoms and causes. Extreme shortness in humans with proportional body parts is caused by hormones, such as growth-hormone deficiency. Another cause is achondroplasia, the body's limbs are proportionately shorter than the trunk (abdominal area), with a head larger than average and typical facial features. It is caused by a faulty allele in the genome. Growth hormone deficiency is another cause in which the body produces insufficient growth hormones. If this gene is missing, the growth of body is stunted or even halted.

Dwarfism is often diagnosed in childhood on the basis of visible symptoms. Short stature or stunted growth during youth is usually what brings the condition to medical attention. Skeletal dysplasia is usually suspected because of obvious physical features; it can be diagnosed by X-raying bones. It is also possible to prevent dwarfism because they are genetically caused. These conditions can be identified by genetic testing. There is no individual treatment for dwarfism. The bone dysplasia cannot be corrected, but can be managed by therapeutic interventions to prevent or reduce pain, physical disability, and increase in adult height, psychosocial stress and enhanced social adaptation. Specialized furniture is often used by people with dwarfism. Many support groups provide services to aid individuals with dwarfism in facing the challenges of an ableist society. 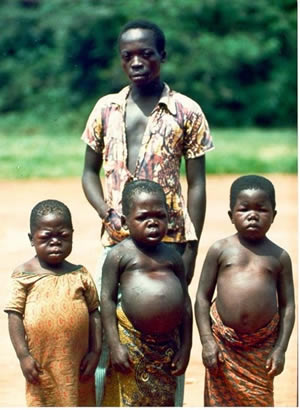 Cretinism is a condition arising from the deficiency of thyroid hormone, which causes dwarfism and mental retardation. It is present from birth.

Congenital hypothyroidism can be common, genetic or periodic. If untreated, it results in mild to severe impairment of both physical and mental growth and development. Poor height growth is apparent early, in the first year of life. Adult stature without treatment ranges from 1 to 1.6 meters depending on the severity of the disease, sex and other genetic factors. In adults, cretinism results in mental deterioration, swelling of the skin, loss of water and hair. Bone maturation and puberty are severely delayed. Ovulation is impeded and infertility is common. Neurological impairment may be mild with reduced muscle tone and coordination. It can be so severe that the person cannot stand or walk. Cognitive impairment may also range from mild to so severe that the person becomes nonverbal and dependent on others for basic care. Thoughts and reflexes are slower. Other signs may include thickened skin, enlarged tongue, or a protruding abdomen. Periodic and genetic cretinisms result from abnormal development or the function of the foetal thyroid gland.

Cretinism arises due to deficiency of iodine from the diet. It has affected many people worldwide and continues to be a major public health problem in many countries. Iodine is an essential trace element, necessary and primarily for the synthesis of thyroid hormones. Iodine deficiency is the most common preventable cause of brain damage. Although iodine is found in many foods, it is not universally present in all soils in adequate amounts. It also causes gradual enlargement of the thyroid gland, referred to as goiter.

Comparison between Dwarfism and Cretinism: