Key Difference: The Microsoft Surface RT is a tablet that features a 10.6-inch TFT HD capacitive touchscreen with approximately 148 ppi density. The screen affords the true 16:9 aspect ratio. However, the OS is not compatible with old Windows PC programs. The Lenovo IdeaPad Yoga 13 features a 13.3 inch HD+IPS capacitive multitouch display and weighs 1.54 kg (3.4 lbs). It is available in various models, powered either by 3rd generation Intel Core i7/ i5 / i3. The models would come with either a 4 GB DDR3 RAM or 8 GB. 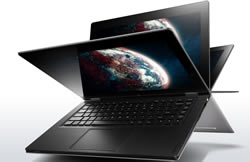 Lenovo IdeaPad Yoga 13 is yet another offering by Lenovo under its IdeaPad series. However, the unique aspect of the device is that it is a convertible laptop with multi-mode 360 deg Flip design. This allows the device to take up four design modes. This includes Laptop Mode, Tablet Mode, Tent Mode and finally, Stand Mode. This is managed by using two double sided hinges. This feature gives the device versatility and allowing the user to use the device as either a laptop or a tablet. Hence, the device is effectively two-in-one, a tablet and a laptop.

The information for the detailed table about the two devices has been taken from the Microsoft website, Lenovo website and GSMArena.com.