Difference between Capital and Capitol

Key Difference: The word Capital actually has a few different meanings including a place where the country’s major legal decisions take place, uppercase letters in grammar, punishments that include execution, and something related to wealth or referring to something that is serious or important. On the other hand, the word Capitol refers to a building where legislations take place. 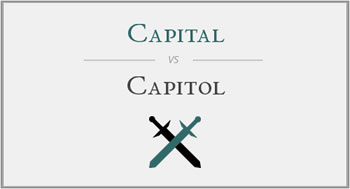 There is only one letter that sets Capital apart from Capitol and this letter results in a whole lot of confusion for a lot of English speakers. And since both the words are commonly used in a political context, it makes them even more difficult to differentiate.

The words, Capital and Capitol are actually homophones. This means that both the words sound the same when pronounced but they have very different meanings and usage. Let’s take a look at how they differ from each other.

The word Capital actually has a few different meanings that depends on the context in which it is used. It is derived from the Latin term, ‘capitalis’, which means “head” commonly used to refer to the head of the city in which the government of a nation, state, or other political jurisdiction is based. This is why the place where the country’s major legal decisions take place are commonly known as the Capital City. For example, Washington D.C. is the capital city of the United States.

But the definition is not limited to this, but capital is also used in basic grammar when talking about writing letters in uppercase. These are known as capitalization of letters and are used when using proper nouns. Other definitions also include punishments that include execution (capital punishment), something related to wealth (capital gains) or referring to something that is serious or important (capital offense). 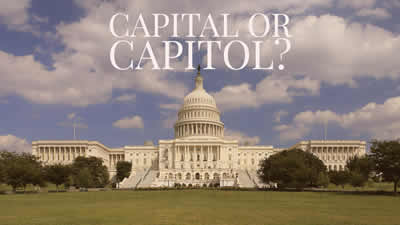 On the other hand, the word Capitol refers to a building where legislations take place. The word “Capitol” actually shares the etymology with Capital, but this Capitol is actually taken directly from Capitoline Hill, which was one of fabled seven hills of Rome, where the Capitolium (a temple dedicated to Jupiter) was said to have been located.

The most famous Capitol is The United States Capitol which is located in Washington D.C. But the word can also be used to describe other places where legal decisions take place. There is also a capitol building in Texas, Kentucky, Nebraska and 39 other states. Other names that are also used instead of capitol include Statehouse, State House, and Legislative Hall.

Comparison between Capital and Capitol: