Difference between Unit and Apartment

Key difference: A unit is any dwelling which is intended to be used as living quarters. An apartment is a self-contained housing unit which is part of a building.

A unit and an apartment are both a kind of dwelling intended to be used as a residence. A unit is any dwelling which is used as living quarters, whereas an apartment is a specific type of a unit.

An apartment, also know as a flat or condo, is a self-contained housing unit, a type of residential real estate, that occupies only part of a building. The building is usually two or more floors. The multi-storied building is called an apartment building, apartment house, a block of flats, a tower block, a high-rise or a condominium. The building can have one or more apartments per floor. The hallways, stairs, and elevator are communal and are maintained by the building owner. The owner is also responsible for the building being up-to-date with fire and safety regulations. The apartments in such a building can be either bought or rented from the building owner. 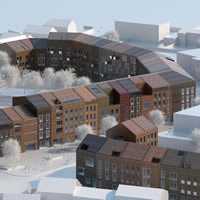 A unit can be used to refer to a house, apartment, mobile home, trailer, group of rooms, or a single room which is occupied or used for occupancy as separate living quarters. Commonly, the term, unit, refers to an apartment or a villa unit or home unit. In a home unit, the group of dwellings is located in one or more single storey buildings. These buildings are usually arranged around a driveway. So, basically a unit can be described as a self-contained suite of rooms, which may be attached, semi-detached or detached, within a group of similar dwellings.