Difference between Continent and Ocean

Key difference: The difference between continents and oceans is that the ocean is a large water body which covers 79% of the earth’s surface, whereas a continent is a huge landmass whose borders are defined by oceans.

This article helps to differentiate between ocean and continents. The term ‘continent’ is defined as a very large landmass on Earth. There are a total of seven continents in the world and all these continents are separated from each other by oceans. 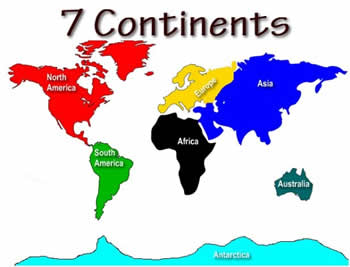 A continent is a large continuous landmass. It is a part of the Earth. There are seven continents: Asia, Australia, Antarctica, Africa, North America, South America and Europe. Australia and Antarctica differ from the others, since both are considered as countries as well as continents.

Continents are described by the means of tectonic plates. Plate tectonics is the study of continental drift i.e. the movement, collision and division of continents.

Continents are considered to be large, continuous and discrete masses of land which are separated by expanses of water. It is a land mass that is divided into regions, referred to as countries which are unequal in size. A continent is independent in nature and are separated by the geographical boundaries. In geology, the large area of land is defined as a continent and the large area is a reason for the less number of continents on the Earth. Continents are home to numerous countries in this world and countries in turn are home to many cities and towns. The people from the same continent may have certain similarities.

According to Wikipedia, an ocean is a body of saline water that composes much of a planet's hydrosphere. 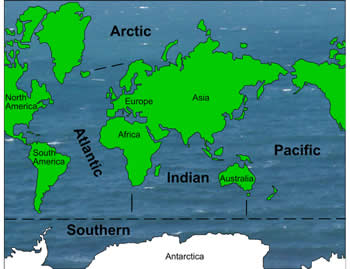 Earth is the only planet that is known to have an ocean. Saline water covers approximately 72% of the planet's surface and is customarily divided into several principal oceans and smaller seas. The ocean contains 97% of the Earth's water and it is said that only 5% of the ocean has been explored.

The word sea is often used interchangeably with ‘ocean’ in English but strictly speaking, a sea is a body of saline water that a land partly or fully encloses. The ocean principally comprises the hydrosphere and therefore is integral to all known life forms, is a part of the carbon cycle, and influences climate and weather patterns. It is the habitat of millions of known and unknown species. Although much of the ocean's depths remain unexplored, over two million marine species are estimated to exist. The origin of the oceans are unknown, as the oceans are believed to have formed in the Hadean period and may have been the impetus for the emergence of life.

Though generally described as several separate oceans, the waters comprise of one global, interconnected body of salt water referred to as the World Ocean or global ocean. The major oceanic divisions are defined in part by the continents, etc. A few examples of oceans are the Pacific Ocean, Indian Ocean, Atlantic Ocean.

Comparison between Continent and Ocean: