Difference between Dove and Turtle Dove 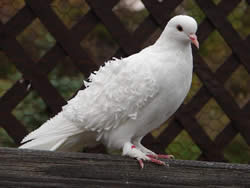 Doves and Turtle Doves are actually more similar than different. They are both part of the Columbidae family, while Turtle Doves are a subspecies of the Streptopelia genus. The distinction between these two birds is often difficult for many people that are not well-versed with these two birds. Doves are often portrayed as the white birds that symbolize peace. However, there is no distinct difference between pigeons and doves, with Turtle Doves being a subspecies of this family.

Pigeons and doves both belong to the Columbidae Family, which includes around 310 species of birds. The term ‘pigeons’ and ‘doves’ are often used interchangeably. In ornithological practice, the birds that are larger in size are referred to as pigeons, while the smaller ones are referred to as doves. Doves are found in almost all types of climates, except extreme cold or dry places. They have large natural habitats and can also be found as pets of many people.

Doves vary in sizes based on the different species, while some can even grow to the size of a turkey. The largest species is known as the Crowned Pigeon of New Guinea, which is approximately the size of turkeys and can weigh between 2-4 kgs. The smallest species is the New World Ground-Dove which is approximately the size of a hummingbird and can weight around 22 grams. The other species range between these two. Doves are stout-bodied birds that have short necks, and short, slender bills with fleshy ceres. They have short legs and small heads on big compact bodies. They are famous for their head bobbing and cooing. The color of their plumage also changes depending on the type of species. Many doves sport bright plumages, while some are purely white, with specks of black or brown.

Doves are also often found in large flocks that may have anywhere from 50-500 birds. When mating, the male dove will often puff his features and then strut in front of the female he is trying to impress. In addition to following the female, the male also emits small repetitive sounds and often bows and turns as he comes closer. Once the female allows the male into her proximity, the male mounts the female and mates. Pigeons and doves are monogamous creatures and often mate for life. At one time a pair of pigeons/doves may birth one-two eggs. The fledging period of a nestling lasts about 30 days before the nestling can fly on its own.

Doves have had a rich history and due to their gentle nature, they have been easily domesticated for a variety of purposes. They have been associated with peace and spirituality due to their white color. White doves are also considered as good luck when they are released in during ceremonies. Doves have also been used as a sacrifice in many religions, where the people could not afford expensive animal. The Dove is also associated with the Holy Spirit in Christianity. 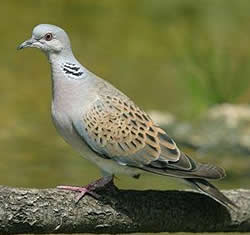 Turtle Dove is a species of birds in the Columbidae family. The name ‘Turtle’ comes from the ‘turr turr’ noises that are emitted by the birds and has nothing to do with the shelled animal. The ‘S. turtur’ species also contains a few other dove subspecies. Turtle Doves are a migratory species that are found in almost all parts of the world, except for places that are extreme cold or extreme dry. The most common type of Turtle Dove is the European Turtle Doves that are found in Europe during the spring seasons and migrate to southern Africa during the winter. These birds are rare in Scandinavia and Russia.

Turtle Doves are small and timid birds and can measure between 24-29 cm (9.4 -11 in) in length and have a wingspan of 47-55 cm (19-22 in). They weigh between 85-170 grams. Turtle Doves are extremely shy creatures and tend to stay away from human civilizations with creating homes in trees and forests. The European Turtle bird is brown in color with a black and white stripe on its neck. They have a wedged shaped tail that has a dark center and white borders and tips. The abdomen and under-tail coverts are white. The Turtle Doves have a black bill, red eyes and legs.

These birds prefer to reside in open parks or gardens rather than dense woodlands. They are omnivores, but live mainly on seeds, berries, cereals, and grasses. They also occasionally feed on snails, small insects. They also feed on the ground, rather than find the food on trees. The mating season is from May-July, when the male and female Turtle Dove will pair for life. These birds lay one or two eggs each clutch and two to three clutches each mating season. Though, they are currently rant ‘Least Concern’ on the IUCN’s Red List, the population for Turtle Doves are on a decline due to lack of proper habitat and food. Turtle Doves are also a huge part of our culture, with them being a symbol of peace and love. They also symbolize eternal love because of them being monogamous.