Difference between Ebola and Dengue

Key Difference: The Ebola Virus named for the Ebola River, is mainly transmitted by contact with blood or other bodily fluids of infected humans or other animals. Dengue, on the other hand, is mainly transmitted through the bite of a mosquito. Ebola kills 25% to 90% of the people that it infects, while only less than 5% of the people infected with Dengue fever are at risk of dying. 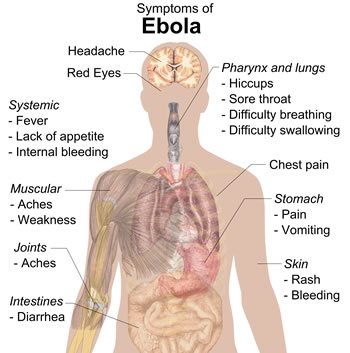 Ebola and Dengue are two serious illnesses that are targeting the human population today. Ebola and Dengue are known to be more common in third world countries, where large populations survive in densely packed environments with poor hygiene, lack of potable water and clean air. However, this erroneously makes people in better living conditions believe that they are safe from these types of diseases. An outbreak of these diseases spreads rapidly both nationally and internationally as witnessed by history.

While both Ebola and Dengue are serious illnesses, Ebola is the more deadly one. The Ebola Virus named for the Ebola River, one of the two sites of initial outbreak, has a much higher fatality rate than Dengue. Ebola kills 25% to 90% of the people that it infects, while only less than 5% of the people infected with Dengue fever are at risk of dying.

Another major difference between Ebola and Dengue is the manner in while they are transmitted. Ebola is mainly transmitted by contact with blood or other bodily fluids of infected humans or other animals. It may also be spread by semen or breast milk even weeks after recovery. It is generally considered that the African fruit bats are the “normal carrier in nature”, and are able to spread the disease without being affected by it. Humans usually contract the disease by coming in contact with the fruit bats or some person or animal, living or dead, who has already contracted the disease.

Dengue, on the other hand, can be mainly transmitted through the bite of a mosquito, which is the most common way that it is contracted. However, a person can also contract the disease through blood transfusions and organ transfers. A mother may also pass on the disease to her unborn fetus.

Dengue fever is also known as breakbone fever, and was first discovered in the 1700’s. Although its viral cause and the transmission were figured out only in the early 20th century. Reported cases of Dengue fever have been increasing drastically since the 1960s. Ebola was discovered much later in 1976, with the first reported outbreak in an area of Sudan and in the Democratic Republic of the Congo. The worst outbreak of Ebola is the 2014 Ebola epidemic in West Africa. 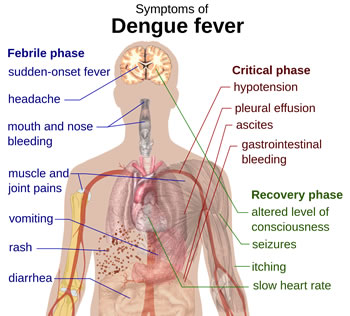 The most common symptoms of Dengue fever are fever, headache, as well as muscle and joint pains. Dengue fever also has a characteristic skin rash that looks similar to measles. In less than 5% of the cases, Dengue fever may develop into dengue hemorrhagic fever or dengue shock syndrome, both of which can be life-threatening. Dengue hemorrhagic fever causes bleeding, low levels of blood platelets and blood plasma leakage, whereas dengue shock syndrome results in dangerously low blood pressure.

Ebola’s symptoms are somewhat similar in the initial stages but differ later on. Within two days to three weeks of contacting the virus, the patient may show symptoms of fever, sore throat, muscle pain, and headaches. This escalates to vomiting, diarrhea and a rash, as well as impaired kidney and liver function. In some cases, patients show both internal and external bleeding, such as oozing from the gums, or blood in the stools. This eventually culminates to death between six to sixteen days of contracting the disease.

While, both the diseases can be treated, neither one has a vaccine yet.

Comparison between Ebola and Dengue: