Difference between Egg white and Yolk

Key difference: Egg white is 87% water and 10% protein. Egg yolk contains about 80% of the calories, half of the protein, and almost all fats present in the egg. It contains vitamin A, D, E, B6, B12 and K and minerals such as iron, calcium, and phosphorus, and panthothenic acid. 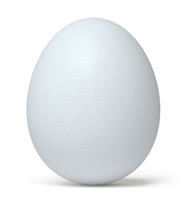 An egg is made up of two main parts contained inside the eggshell: the egg white and yolk. Egg white is transparent and make up the larger part of the egg. Egg yolk is golden yellow in color and is the smaller part of the egg.

The egg white is made up of 87% water and 10% protein, while the yolk consists of 50% water, 16% protein and 32% fat. The egg white contains no fat, no cholesterol, and has between 50% and 80% of potassium, 55 milligrams of sodium, 4 grams of protein and riboflavin. The yolk, on the other hand, contains 5 grams of fat, about 211 mg of cholesterol, 2 grams of protein, 20 milligrams of sodium, in addition to omega-3s, vitamins A, D, E, B6, B12 and K and minerals such as iron, calcium, and phosphorus, panthothenic acid, choline, which is great for brain health, carotenoids which is critical for eye health and zeaxanthin which is a powerful antioxidant. 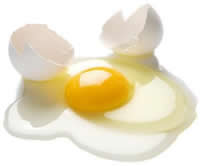 Nowadays, many people believe that the egg yolk is not healthy as it is contains fat and cholesterol, which is why many throw away the egg yolk. However, what they don’t realize is that they are actually throwing away the most nutritious part of the egg.

The best any person could do is to consume the whole egg, as both egg white and yolk are a good source of protein, and vitamins and minerals. Protein is important for energy and for proper organ and muscle function, and the whole egg is a terrific source of healthy protein, dietary fats, B complex, vitamins, folate and other great nutrients, which are necessary for the body to thrive.