Difference between Function and Procedure

Functions and procedures play a vital role in most of the programming languages. They are basically used in modular programming. Modular programming is responsible for dividing a large code into sections of some smaller pieces of code. They are quiet helpful in programming as they reduce the unnecessary duplication of code. This ensures the clarity of a program code. Functions and procedures are helpful in the reusability of the code. In languages like C and C++, a function and a procedure are referred to as one and the same thing. However, in database-oriented programming languages like PL/SQL and Oracle, there is a prominent difference between the two. A function must return a value in PL/SQL and Oracle. However, a procedure in PL/SQL cannot return a value. In Oracle, a procedure can return zero or n values. In Oracle, procedures can have input/output parameters for them, whereas functions can have only input parameters. 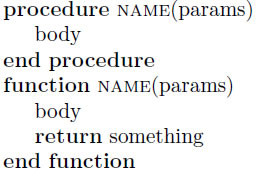 A function can be described as a set of instructions that performs a specific task. A function is assigned a name. It is important to mention that generally a code fragment is often referred to as a procedure and a procedure that returns a value is often referred to as a function. Thus, both have many similarities. They have similar components like declaration and calling mechanisms. The difference between the two depends upon the context of the programming language.

In Visual Basic, a procedure is declared as –

In Visual Basic, a function is declared as –

(Return value is specified in a Return expression)

Comparison between Function and Procedure: