Difference between Kickboxing and MMA

Key difference: Kickboxing and MMA are two different styles of martial arts. In kickboxing the primary moves are kicking and punching, and some clinching. Whereas, the moves in MMA are much more diverse; it includes kicking, punching, clinching, grappling, throwing, etc. 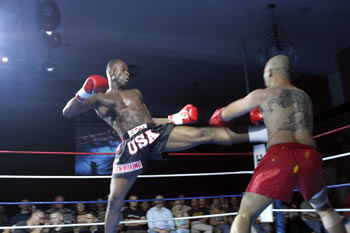 The term kickboxing can be used in two contexts. One is where it can refer to any stand up combat sport which includes both punching and kicking. This includes Savate, Muay Thai, Khmer Boxing, Indian boxing, Burmese boxing, Sanda, and certain styles of Karate, especially full contact karate. However, its second context is narrower. Here it is used specifically to refer to Japanese Kickboxing, Dutch Kickboxing, and American Kickboxing. These are the styles that are inherently known and referred to collectively as kickboxing.

The terms and rules of kickboxing are quite varied. In America, kickboxing and full contact karate are stylistically almost the same. Here, only strikes using punches and higher kicks are allowed. Whereas, in its other forms, low kicks, knee strikes, elbows, and grappling maneuvers are allowed.

MMA, on the other hand, was originally promoted as a competition to find the most effective martial arts for real unarmed combat. This included fighters with various different fighting styles to be pitted against each other. Eventually, these various fighting styles melded together to form what is now popularly known as Mixed Martial Arts (MMA).

While the term, Mixed Martial Arts was first used in 1993, the style of fighting it was used to describe dates back before that. In fact, it dates back all the way to Ancient Greece, where it was known as Pankration, an ancient Olympic combat sport that utilized a combination of grappling and striking skills similar to the modern MMA. This sport then passed down to the Romans, and then further down. 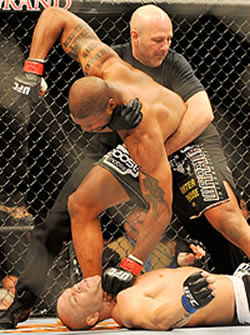 Today, MMA is generally considered as a regulated sporting event complete with weight classes, matches with time limits, protection for the players such as introduction of gloves, as well as rules and guidelines about the kinds of moves allowed and the areas that can be hit, for example, no elbow hits to the head. Of course, these rules may differ depending on the organizer of the MMA event, however most of the rules are considered as consensus.

Certain differences in the fighting styles between Kickboxing and MMA include the fact that in MMA the stance of the fighter is usually lower than in Kickboxing. The lower stance helps to defend against takedowns or to take the opponent down themselves. In kickboxing, the stance is typically much more upright with a little more weight on the back leg. This helps to defend against low-kicks to the upper leg, as well as to throw kicks.

Also, in kickboxing the primary moves are kicking and punching, and some clinching. Whereas, the moves in MMA are much more diverse; it includes kicking, punching, clinching, grappling, throwing, etc. Some forms of MMA also allow knee cuts and elbow strikes, whereas others do not.

Comparison between Kickboxing and MMA: