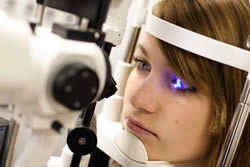 Laser eye surgery is a general term. It refers to any eye surgery done with a laser. Usually, an effective laser is used to correct any irregularities with the eye, especially the cornea. The laser is mainly used to cut tissue in or around the eye. The laser is quite effective in eye surgery as it is narrow and can be pinpointed to an exact location, this level of precision cannot be duplicated with a scalpel.

Laser eye surgery was first introduced in the 1950s by Jose Barraquer. Barraquer was a Spanish ophthalmologist practicing in Bogotá, Colombia. In his clinic, he cut a one hundredth of an mm thick flap in the cornea to alter its shape. In 1968, Mani Lal Bhaumik developed the carbon-dioxide laser at the Northrop Corporation Research and Technology Center of the University of California. This laser was the origin of the excimer laser, which is used in laser eye surgery today. 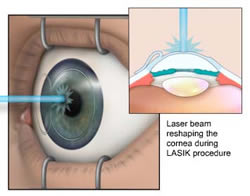 LASIK eye surgery is also termed as Lasik eye surgery. LASIK actually stands for Laser-Assisted in situ Keratomileusis. It is a type of laser eye surgery, which essentially means that a laser is used to make some corrections to the eye in an attempt to improve vision. LASIK is commonly used for conditions such as myopia (nearsightedness), hypermetropia (farsightedness), and astigmatism.

In LASIK eye surgery, the ophthalmologist (eye doctor) cuts a hinged flap over the cornea. The doctor will usually use a special blade or perhaps a cutting laser. The flap is about the size of an average contact lens. The flap is then pulled back away from the eye, revealing the cornea. A laser is then used to adjust parts of the cornea that need correction. After the reshaping is complete, the flap is folded back into place. The flap heals on its own. The discomfort usually lasts for 4-5 hours.