Difference between Meat and Steak

Key difference: Meat is the general term used for all animal flesh, whereas a steak is a portion or cut of beef sliced from the muscle fibers. 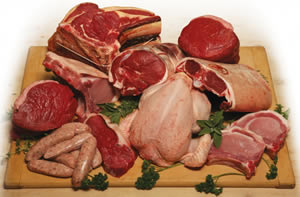 Meat is a generalized term used for all animal flesh. This category consists of flesh from animals such as pigs, cattle, lambs, etc.; however, it does not include fish and other seafood, poultry, and other animals. Often, it is the skeletal muscles, associated fat and other tissues which are used as meat.

Meat, being high in water and proteins, is considered edible raw. However, it is normally cooked, processed and seasoned before eating. It is said to be a part of the meal. Usually, the juicer and richer parts of an animal, which is considered to be the meat, are used for consumption. However, the prime cuts of an animal meat are the T-bone, sirloin and fillet. To enhance the taste even more, meat can be cooked in a variety of ways. Meat can be cooked as steaks, in stews, and fondues. It can be grounded or be used in the forms of patties, loaves, sausages, or sauces. Also, depending on the pallet, meat can be smoked or cured; they are generally marinated and barbecued, or simply boiled, roasted, or fried.

At times, meat is also spiced or seasoned with other meat products such as sausages, etc. and is widely used in sandwiches such as ham, pork, salami, pepperoni, pastrami, etc. However, before enjoying theses dishes, one should make sure that the meat is fresh, processed and safe to eat. Unprocessed meat is a major reason for concern as it is easily spoilt, and if not cleaned thoroughly it can cause infection through bacteria and fungi present on the meat. Though, a common additive for both preservation and procession is adding sodium nitrite to the meat, it is also a source of health concern, because it may form carcinogenic nitrosamines when heated. 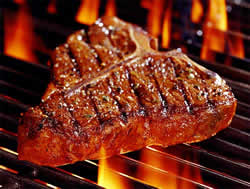 Although, steak is a cut which is obtained from various sources such as beef, tuna, salmon, pork, etc., the term ‘steak’ commonly refers to beefsteak. Beefsteaks are widely and most commonly used, but there are other steaks cuts available such as fish steak, rib steak, T-bones, sirloin steaks, etc. The fish steaks is a cut perpendicular to the spine, which includes the bones. Fishes such as swordfish, halibut, and tuna are cooked as steaks; these are frequently cooked as fillets or whole.

In cooking, the types of steaks are prepared or cooked differently. The most common and popular, beef steaks are generally fried using dry heat, and are served as a whole. The tender cuts of beef, from the lion and rib, are cooked on flame until they are rare, medium rare, medium, medium well done, or well done. These cuts are moist in the centre, which is why the steak is not required to be cooked thoroughly. Other popular steaks are the rib steaks, sirloin steaks, T-bones or Porterhouse steaks, wherein the rib steaks is the cut sliced from the rib primal of a beef animal with the attached bone; the tender sirloin steak which is the rear end of a cow; and the tasty and juicy T-bones which is at the cow’s lower back area. All these steaks are cooked by grilling or frying. They are included as a whole meal and are served with fresh vegetables or sauces. The steaks while cooking are smeared or coated with different sauces to enhance the taste of the meat. Also, these grilled steaks taste great with French fries.

Comparison between Meat and Steak: