Difference between Milk and Soy Milk

Key Difference: Milk is an opaque white nutritious liquid that is secreted from the mammary glands of various females from the animal kingdom like cow, goat and deer. On the other hand, soymilk is a beverage that is made from soybeans, which is a species of legume native to East Asia.

Primarily, milk and soymilk differ in the sources of origin. Milk generally refers to all the kinds of milk that are considered to fall in the category of dairy milk. However, some types of milk can be derived from sources other than dairy, such as soy milk, rice milk, etc. Each type of milk differs in many contexts.

Milk is an umbrella term to denote all kinds of milk obtained from animals like goats, cows and deer, as well as humans. This milk is generated by these animals in order to nourish their young ones. It is a combination of proteins, lactose and vitamins. Many of us are unaware that it contains more than 100 substances that are either in the form of solution, suspension or as emulsion in water. Cow's milk contains 30 percent of the daily value of calcium which is good for bones and teeth. 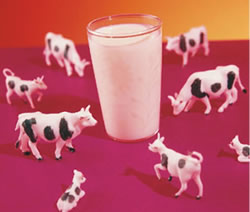 Lactose is the primary carbohydrate that is present in the cow's milk. It often causes a digestive problem for some people. Some people do not have sufficient lactase enzymes that are needed to break down this milk sugar. Still, if they consume milk then gas, bloating, and diarrhea can be caused. Such people are advised to purchase products in which lactose have been already in a broken form or take the enzyme in the form of a pill or drops, or they can also find a substitute for these milk and dairy milk products.

Whole milk is more nutritious than its variants. However, the milk that we get may also be mixed with certain undesirable elements like:-

The name of soy milk itself indicates that it is obtained from soy beans. In order to obtain this milk, soy beans are crushed. It is a beverage that is a combination of proteins, water and oil. 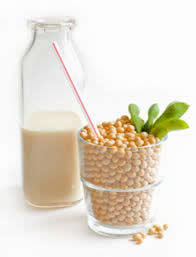 compared to dairy milk. It has little saturated fat in comparison to cow’s milk. There is no cholesterol present in soy milk. Soy milk is also preferred for its 10 percent of daily value of dietary fiber which is absent in whole cow milk. If one is allergic to soy, then drinking of soy milk can cause hives, swelling and diarrhea. Soy milk is naturally cholesterol free and thus, it helps in regulation of blood pressure.

One important advantage with soy milk is that it can be consumed by people who are intolerant to lactose or casein. However, soy milk contains low amount of calcium in comparison to cow’s milk and therefore is not that good for bones and teeth.

The composition of important element present in these milks is depicted in the table below:-

Both vary in the composition and thus, it depends upon the nutritional requirement of an individual on which the preference can be made.