Difference between Myopia and Hyperopia 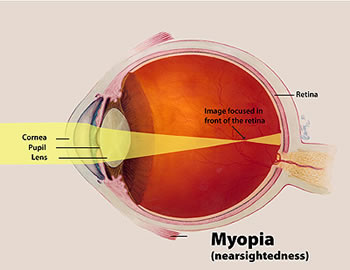 Myopia, commonly known as short sightedness or near-sightedness, and Hyperopia, known as long sightedness, are two of the most common eye conditions. Contrary to popular belief, the reasons behind these conditions are not because of watching too much TV or playing too many video games, or even reading in the dark. In fact, these conditions are actually birth defects. They occur because the shape of the eyeball or the eye lens is incorrect, which causes the eye to be unable to focus light properly onto the retina.

Myopia is a hereditary disorder, which means that chances for someone to develop myopia increase if their parents also have the condition. In addition, the risks of developing myopia may increase due to environmental factors, such as spending too much time indoors as a kid, or not getting enough sunlight, or spending too much time doing near-eye work. In addition, things like sex, age, ethnicity, as well as the body’s circadian rhythms, i.e. the biological clock may also have an impact on the development of myopia. However, other than genetics, everything else is speculative, as there is not enough data available to make a correlation. Hyperopia, on the other hand, is a condition that is commonly referred to as long sightedness, which means that is can be stated that hyperopia is the opposite of myopia. In hyperopia, objects that are close appear to be blurry, while far away objects appear normal. This is due to the fact that they eyeball is too short, which causes the incoming light to focus behind the retina, causing things to appear blurry.

Hyperopia can be caused by a couple of reasons. The most common is that the person if born with a short eyeball, i.e. it is a birth defect. Yet, in a number of cases as the child grows, the eye elongates, thus the condition corrects itself. In cases where that does not happen, the person may have to live with hyperopia. Another reason for developing hyperopia could be due to low converging power of the eye lens because of weak action of ciliary muscles. This may also happen due to age, as the ciliary muscles get weaker. In rare instances, hyperopia may also be cause by diabetes, as well as due to problems with the blood vessels in the retina.

There are ways to manage and treat these conditions. The most common way to treat myopia and hyperopia are by use of glasses. The lens in the glasses alters the way light enters the eye, hence allowing the eyes to focus the light onto the retina, thus allowing us to see it. Alternatively, some people choose to opt for contact lenses, which work in a similar manner. A more permanent manner to treat myopia and hyperopia is to get corrective laser surgery, which fixes the cornea.

Comparison between Myopia and Hyperopia: