Difference between Roti and Naan

Key Difference: Both are types of flatbread. Roti is generally made from whole wheat flour and is cooked either on a tawa (flat skillet) or in a tandoor (oven). Naan is cooked from all-purpose flour, is leavened, i.e. uses yeast, and is cooked in a tandoor. 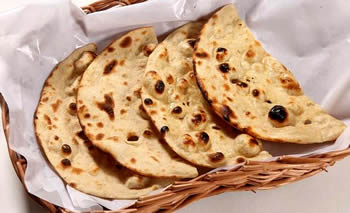 Indian cooking has always been popular both with Indians and non-Indians. However, its popularity is increasing, even more, these days. The result of that is that many people may come across a number of Indian terms whether in restaurants or even from friends and relatives that can’t help but describe the awesome meal they’ve recently enjoyed. Also see the difference between white bread and wheat bread.

There are two prominent types of roti: regular and tandoori. The former has numerous types in itself, however all of these types have one thing in common; they are cooked on the tawa, which is a type of flat skillet. The second type of roti is the one that is cooked in a tandoor, which is a type of barrel-shaped oven. The latter is known as tandoori roti. 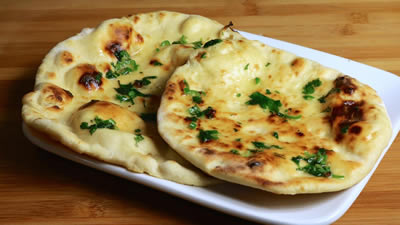 Another difference is that the dough used for the naan is leavened, which basically means that it is been proofed with yeast or dough starter, i.e. dough from the last batch. The dough for roti is not leavened, which means that it does not use yeast. Some people also add milk to the naan dough; however, that is primarily out of regional or personal preference and is not particularly common. The milk makes the dough extra soft, which is why some people also add milk to the roti dough. However, this is again not generally widespread. Also see the difference between cake and brownie.

In general terms, a roti is a type of Indian flatbread that is made from whole wheat flour, which is locally known as atta. It a flat thin disk shaped bread that is a primary staple in most Indian meals. This is the most common and widespread type of roti to be cooked and consumed in every Indian household. Some people do tend to use all-purpose flour to make roti or a mixture of all-purpose and whole wheat flour. However, here unless the resultant dough is cooked in a tandoor, it would not be labeled as a naan.

See: Difference between biscuits and crackers

Difference between Roti and Naan: