Difference between Supermarket and Wet Market

Key Difference: Supermarkets are large self-service grocery stores that offer customers a variety of foods and household supplies. The merchandise is organized into an organized aisle format, where each aisle is numbered or labeled and has only similar goods placed together. Wet Markets are markets that are associated with fresh foods, wet floors and humid temperatures. In these markets, sellers constantly use water to wash down foods and floors to keep them clean and humid.

Supermarket and wet markets are two different types of shopping venues. Supermarkets are popular all over the world, with wet markets being popular in Asian countries and only recently gaining popularity in certain places. Supermarkets are enclosed markets with centralized heating and cooling that allows customers to walk through aisles and at leisurely pick up groceries. Supermarkets also have other supplies than only foods, such as household cleaning supplies, baby goods, pet needs, medicine, etc. Wet markets contain mostly food items and are associated with having wet floors. The wet floors ensure that the food does not spoil fast. There are also no set prices in wet markets and the vendors are open to bargaining.

The concept of an inexpensive food market that relies on discounts based on economies of scale was developed by Vincent Astor, who founded the Astor Market in 1915 but failed to be able to make a successful venture and shuttered it in 1917. The first self-service grocery store concept was developed by entrepreneur Clarence Saunders, who founded the Piggly Wiggly stores in 1916. The store become a financial success and become a franchise. Slowly, the concept started becoming popular all over the world, with many developed countries establishing their own self-service grocery stores. In the developing countries, self-service grocery stores are a recent phenomenon and have received only gained popularity in the last decade or so. Specifically in these countries, many supermarkets also offer loose or open merchandise similar to old grocery stores. People can measure out grains, rice and other staple products and buy it by weight. Supermarkets have also started offering ready-to-eat foods as a way to provide the customer to shop as well as eat at the same time. Some supermarkets may also have banks, ATMs, coffee bar, juice bar and anything else that may attract customers. 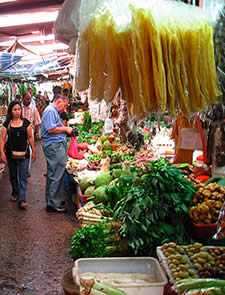 Wet Markets are markets that are associated with fresh foods, wet floors and humid temperatures. These markets are popular in many Asian countries and are now popping over in select places in even non-Asian countries. Asian countries such as Hong Kong, China, Japan and Philippines are famous for their wet markets, with many tourists visiting these wet markets for the ‘authentic cultural experience’. Wet markets usually have an array of fresh fruits, vegetables, sea food and poultry. The term ‘wet markets’ comes from the constant use of water in these markets, on floors, on fruits and vegetables, tanks of live sea creatures, etc.

In wet markets, sellers constantly use water to wash down foods and floors to keep them clean and humid. The humidity in the temperature ensures that the food stay fresh for longer periods of time. These markets are open from sunrise to late night, with the best produce being found early in the morning or in the evening. These markets also offer small live animals and sea food options. The people get to see the small animals and choose them before the animal is killed and skinned in front of them. The is a controversial process as many animal welfare activists are criticizing the small cages the animals are locked in and the conditions in which animals are kept against animals rights.

Originally wet markets would also have large live animals in these markets, but since the spread of diseases and lack of proper placing of the animals, they have since become an uncommon feature of the market. Though, the market ensures that the food found is fresh, there are also high chances of contamination. This is due to open nature of the market, where flies and germs have easy access to the foods. In addition to having wet foods, the market also dried goods such as spices, processed tofu, flowers and cooked meats. The goods at a wet market come from local farms, with the vendor setting his/her own price depending on what they want. Getting the best price and the freshest food is the task of the purchaser. A new trend that has been popping up in many places is an enclosed wet market, where large buildings are rented out to stall vendors and the market is placed in that building. This is considered a little healthier than the open market.