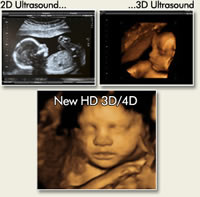 Ultrasounds, also known as sonograms, are a medical test which uses high frequency sound waves to produce a picture of the organs in the body. In pregnancy, ultrasounds are used to produce an image of the fetus. According to the American Pregnancy Association, there are seven types of ultrasounds: transvaginal, standard (2 dimensional or 2D), advanced (targeting a specific issue of concern), fetal echocardiography (assessing the heart), Doppler, 3D and 4D (also known as “dynamic” 3D because it focuses on the face and fetal movements). Ultrasounds are usually done in order to keep track of the pregnancy and to ensure that the baby is safe and healthy.  3D Ultrasound and 4D Ultrasounds have gained a lot of popularity with expecting parents.

Technically, 3D and 4D are not better than 2D, they are just different. 2D uses sound waves to produce a two-dimensional black and white picture of the fetus. These pictures are then used to see the development of the baby, diagnose any abnormalities, and sometimes to see the gender of the baby.

3D ultrasound bounces sound waves off the fetus from various different angles, and produces a three-dimensional image of the fetus. This image shows depth and great detail. A 4D ultrasound uses the same technology as 3D, but also shows movement. 4D takes three to four images per second, which compiled together show movement. It can show the unborn baby moving around, yawning, sucking his or her thumb and even appearing to “wave”.

Usually, a 2D ultrasound is enough to serve the purpose of routine check-up, but sometimes a 3D or 4D is needed to confirm an abnormality. 4D makes it possible to assess fetal development and/or diagnose issues more efficiently, as the doctor can see the organs in real-time. However, the popularity of 3D and 4D comes mainly from the fact that 3D provides high-definition color pictures of the unborn child, which the parents can take home and that 4D ultrasounds showing the unborn child’s movement can be saved to a DVD as keepsakes and for later viewing. 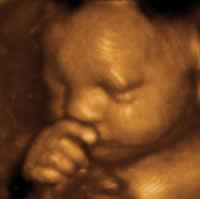 Due to the popularity, private clinics and center have popped up which proved 3D and 4D ultrasounds. Before using these services however, one should always check that they have properly trained and licensed technicians, sonographers and doctors.

Furthermore, one should note that 4D ultrasound is more expensive than 3D ultrasound, and that neither is covered by healthcare insurance, as they are not really necessary from a medical point of view. The price difference in cost is mainly due to new equipment and the additional processing power required for turning out better images and producing a real-time video.

Additionally, one should note that 4D ultrasound may cause additional risk to the unborn child than 3D ultrasound. This is not proven; but many physicians still recommend that medically unnecessary ultrasounds should be avoided. Some claim that prolonged exposure to ultrasounds mainly resulting from parents wanting to get a better view of the baby, a longer video, or even waiting for the baby to move just to catch in on video, may be harmful of the unborn child.