Difference between Animal and Plant Cells 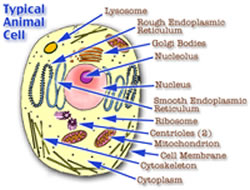 The main difference between an animal cell and a plant cell is that, plant cells have a cell wall, which the animal cell lacks. The cell wall which is made up of cellulose gives the plant cell rigidity resulting in a fixed, rectangular shape. Animal cells lack the rigidity hence, they tend to have a round and irregular shape. Animal cells tend to vary greatly in appearance. The cell wall allows high pressure to build inside of the plant cell without bursting. Due to this, the plant cell is able to accept large amounts of liquid through osmosis without bursting. Animal cells, which only have a thin membrane restricting access to the cell, tend to burst if they absorb too much extra water.

Both animal cells and plant cells have a defined nucleus, which contains chromosomes. The nucleus is protected and surrounded by cytoplasm, a watery or gel-like liquid that holds all the organelles in place. The cytoplasm, in turn is held in by the cell membrane. 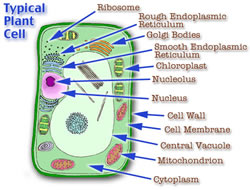 However, all animal cells have centrioles whereas only some lower plant forms have it. Also, plant cells tend to have one large central vacuole that can take up to 90% of cell volume. Animal cells tend to have one or more small vacuoles. Vacuoles contain waste materials, water, and nutrients that can be used or secreted as necessary. In plant cells, vacuoles store water and maintain turgidity of the cell. In animal cells, they store water, ions and waste.

Another difference among them is that plant cells have chloroplasts for photosynthesis, which allows them to covert sunlight into food for the cell. Chloroplasts have its own DNA and tend to direct their own work. Animal cells lack chloroplasts and hence this ability, which is why we can’t live off of sunlight, sadly.

thanks it helped a lot

It really works and helps

This has helped me a lot in my college work.This page is very useful for science admirers.

Thanks it was very helpful

thanx it was really helpful

Thanks for this information Team Hooke