Difference between Apathy and Empathy

Key Difference: The word apathy is actually absence of emotion or lack of caring. On the other hand, the word empathy means placing yourself in someone else’s position or shoes and feeling their pain as if it was yours. 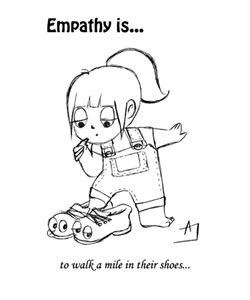 The terms apathy and empathy are often confused because the similarities between the two words. Often than not, these words are used incorrectly because of their pronunciation. However, these words could not be more opposite.

The word apathy is actually absence of emotion or lack of caring. This can be in the sense of not caring what is going on around you, or it can be in regards to someone’s feelings. However, the two terms mean lack of emotion or caring.

On the other hand, the word empathy means placing yourself in someone else’s position or shoes and feeling their pain as if it was yours. Empathy arises from making an emotional connection with someone, so you feel something their pain or rather feel for them that they have to go through this pain.

If we look in this context, a person who is empathetic is someone who will put themselves in your shoes and try to feel your pain and will feel bad if you feel bad. On the other hand, a person who is apathetic would not feel anything for you or your pain. He would lack any or all emotion regarding your pain.

An example of both these words would be: 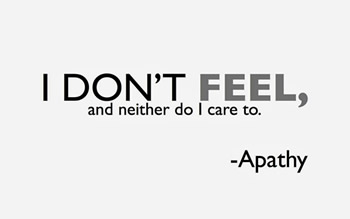 Johnny just broke his ankle after a bad accident and came back to school. Tim says, “Oh wow, Johnny, you look like you are in pain. I feel so bad you had to go through such a thing.” On the other hand, Sam says, “It’s not that huge a deal, man up! Let’s go bowling.” In this scenario, Tim would be empathetic to Johnny’s cause and pain, while Sam is apathetic to how he feels, cause he doesn’t feel anything towards Johnny’s pain and misery.

However, apathy isn’t always the bad guy that it is made out to be. Apathy can also be not caring about a certain situation. For example, if someone is having a bad day with one bad thing after another happening to them, then they might become apathetic to that situation. Also, if someone keeps treating someone badly, then they might become apathetic to that person’s behavior towards them.

Comparison between Apathy and Empathy: