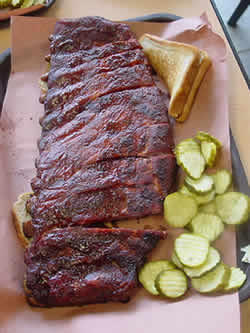 Ribs of beef or pork refer to a cut of meat. Beef ribs are derived from cows, whereas pork ribs are obtained from pigs. It usually refers to the part of chops which is less meaty. These ribs can be made to cook by using a variety of techniques like roasting, grilling, baking, etc. However, in American cuisine, these ribs usually refer to barbecued ribs which are often served with any of the barbecue sauces.

Beef ribs are usually less expensive than pork ribs. Beef ribs contain massive bones and are not much meaty. 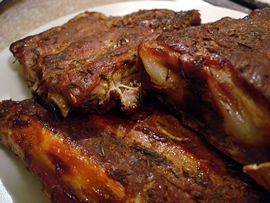 Spare ribs are the intact rib section separated from the belly and may also include coastal cartilages. St. Louis style ribs originate from pork spare ribs are are prepared by removing brisket bone. Rib tips are smaller meaty pieces which are cut from pork spare ribs when St. Louis ribs are being made by applying a trimming process. These ribs are smaller and easy to handle. In terms of nutritional values, both pork and beef ribs are quiet the same. Beef ribs are typically chewier than pork ribs.

Beef ribs have less fat than pork ribs. Due to this fat present in pork ribs they do not require much attention to be kept moist and tender as required by beef ribs. Beef ribs must be cooked slowly at a low temperature so that the connective tissues melt properly. Beef ribs are cooked best in a smoker. American barbecue beef ribs aren't nearly as common as their porky counterparts.

Beef ribs are quite huge as compared to pork ribs. It still depends upon the individual's choice to prefer one over the other as both are different in texture and taste.

The first paragraph of this "Analysis and Comparison" is ridiculous. Beef and Pork descriptions are reversed as well as using the word "quiet" instead of "quite". I couldn't get beyond that and had to post this since I was "quiet" bewildered!

Hi Robert, thank you for pointing out these errors. We have gone over the article and fixed them.