Difference Between Blockchain and Cryptocurrency

Key Difference: The widely searched topic Blockchain and Crytocurrency are quiet confusing due to the usage of their terms. As per blockchain.wtf, instead of being introduced by a formal definition, the term blockchain developed from 'chain of blocks'. While, Cryptocurrency is a sort-of portmanteau of 'cryptographic currency'.

But the major difference between the two concepts is the way how distributed ledger technology is used. When Bitcoin was the only Blockchain, there was not much of distinction between the two terms and were used interchangeably. Blockchain and Crytocurrency go hand in hand as the later is the side-invention of the former as a solution to prevent double-spending and eliminating third-party in payments by Satoshi Nakamoto. Crypto is often necessary to transact on a blockchain, but without a blockchain, there would not be any means for these transactions to be recorded permanently and forbidding any alteration and transferring securely. The difference came after the creation of other virtual currencies due to maturity of technology and blooming of variety of blockchains, the uses quickly diverged from the pure money aspect and instead experimented with ideas.

Blockchain, originally a chain of blocks with a growing list of records (blocks) are designed to be interlinked and locked as a chain. It is a digital transaction ledger technology, which maintains all the transactions ever made by an individual and are publicly available for all. Blockchain was first conceptualized by Satoshi Nakamoto in 2008, which was originally published as two separate words Block and Chain in his original paper. But the word Blockchain eventually became popularized as a single word by 2016. Blockchain is a decentralized, distributed and public digital ledger, used for recording transactions across multiple computers, which forbids retroactively altering the records without the alteration of all the subsequent blocks and the consensus of the network. So, therefore, by design a blockchain is a resistant to modification of the data. It was invented to serve as the public ledger containing transactions of the cryptocurrency bitcoin. All blocks are linked using cryptography, with each block containing a cryptographic hash of the previous block.As per Arjun Kharpal on cnbc.com, advocates of this technology says that the using blockchain makes bitcoin transaction secure and safer than the current systems, because of the following points:

The 'Miners' are the network of people who maintain the blockchain network and are sometimes also called 'Nodes'. These are the people running the purpose-built computers that compete to solve complex mathematical issues for the transaction to take place. Each transaction originates from a wallet of an individual and it also has a private key. This private key becomes the signature, authenticating the transaction as a proof for the individual as well as the wallet. All the individuals are grouped together in a group known as Blocks and are organized using stringent cryptographic rules. After the wallet and the owner are validated, the transaction is added in the validated block, which is then added to the previous block creating a chain of blocks known as Blockchain.

Many firms are using blockchain as an technology by adapting to what works best with their business. Ability to have a shared ledger of activity makes transaction more efficient, involvement of intermediary parties are less and with a reduced processing costs, the firms are attracted to use the blockchain technology to its best advantage.

Blockchains are tampered proof with each block on the chain has a cryptographic reference to the previous block with each hash being unique needing to solve mathematical problems and puzzle called 'nonce'. A nonce is combination of other data like transaction size, digital fingerprint is called 'Hash' making it encrypted and secure. To tamper the data in the blockchain, a person needs to re-mind all the cryptographic data of each previous block, which are over half a billion puzzles with each hash having certain cryptographic conditions.

Number of firms have created many other blockchain platforms to help other firms interested in the technology built processes, though bitcoin blockchain is not created for companies to build app and processes on. Ethereum, Ripple, Hyperledger, IBM, R3, are some few names that have developed such platforms, wherein Ethereum is one of the essential blockchain platform that specializes in smart contracts and has a digital coin linked to it known as Ether and is the world's second-largest cryptocurrency by value.

Banking industry sees lot of adavantage by using blockchain technology as it reduces costs and make processes efficient. Banks often call this technology as DLT or Distributed Ledger Technology and distinguishing it from bitcoin blockchain. Many major banks have begun experimenting the technology . Different financial institutions like Goldman Sachs, JP Morgan, and Bank of America have expressed great interest in blockchain by joining a coalition to implement the same in banking practices. Visa, Citi, NASDAQ and others have agreed to become clients for blockchain related technology and services.

The technology can also be used to track ownership of assets like property or can track a product across the supplychain like for example, Diamond producer, De Beers, recently announced that the firm has trialed the technology to trace the stones from the time they were mined to delivering them to a jeweller.

Cryptocurrency emerged as a side product of another invention, Bitcoin by Satoshi Nakamoto. The unknown inventor in late 2008 announced development of a Peer-to-Peer Electronic Cash System. This system, which prevent 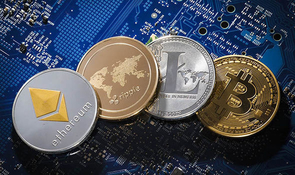 double-spending, completely decentralized with no server was the first after so many failed attempts to create digital cash system. This decision was the birth of cryptocurrency.Cryptocurrency is the solution for achieving complete consensus without central authority. Cryptocurrency uses cryptography to secure and verify every transactions as well as creation of new units of a particular cryptocurrency. Definition to cryptocurrency is that it is a digital asset that can be exchanged and which has no physical form or shape. The 'crypto' part stems from the use of cryptography for security and verification purposes during transactions. Liza Deikun on medium.com, has explained Cryptocurrencies as Currencies are 'Economic Buffers' which allows you to convert your efforts in something, which maintain the value. The value can later be transformed into a service or goods. The process of converting plain text into unintelligible text and vice-versa is known as Cryptograpghy. Combining the two, Cryptocurrency is medium of exchanging values in digital form and world that relies on encryption making the transactions secure. Cryptocurrency is an alternative to the ordinary payments and money like cash, cards and checks. Blockchain provides the technological platform which help cryptocurrency's transactions to take place directly without the involvement of third party like banks. Cryptocurrencies are also known as Virtual Accounting Systems, keeping the record of all the transactions which are bundled together in blocks and are cryptographically signed and encrypted. One of the most important cryptocurrency, which has become the de-facto standard for cryptocurrencies is Bitcoin. Other important cryptocurrencies besides Bitcoin are Ethereum (ETH), Litecoin, (LTC), Dash and Ripple (XRP).

How do Blockchains and Cryptocurrencies really intersect?

As explained by Dave Balter on Hackernoon, if TCP/IP (Transmission Control Protocol / Internet Protocol-which is a set of rules that govern the connection of computer systems to the internet.) were a blockchain, you need InternetCoin to access Facebook. IntenetCoin would be the cryptocurrency while TCP/IP would be the protocol layer equivalent to blockchain. This means, that you would need to trade InternetCoins to use it to access the service built on top of it.(TCP/IP or blockchain). The result would be that you would actually have the protocol layer, (the technology on which Facebook is built) gain and capture value through the use of cryptocurrencies, instead of all the value of Facebook benefiting the Facebook shareholders.

Comparison between Blockchain and Cryptocurrency