Difference between Bootleggers and Rumrunners

Key Difference: Bootleggers were smugglers that helped smuggle the moonshine for distribution. They were responsible for hiding and transporting the illegal alcohol using cars, trucks and other land transportation. Rumrunners is another term that is used to refer to people that used to illegally transport and distribute alcohol, most commonly moonshine. Rum-running was most commonly done on the sea. 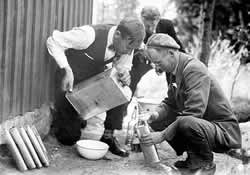 Bootleggers and Rumrunners became popular during the American Revolution and are often associated with moonshine or illegal alcohol. The American Revolution was providing to be expensive to the government and after exhausting all means revenues, they started levying federal taxes on liquors and spirits for additional funds. This did not sit well with the American citizens, as one of the main reasons for the war was to free themselves from the heavy taxes levied by the British Empire. This gave birth to Moonshiners, or people that started developing illegal alcohol. Then the Prohibition that was enacted on January 16, 1920, which helped make the bootleggers and rumrunners very popular among the masses. The prohibition forbade people from manufacturing, transporting and selling alcohol and alcoholic products. The prohibition allowed the Moonshiners and bootleggers to flourish during this period by illegally providing alcohol and alcoholic beverages.

Bootleggers were smugglers that helped smuggle the moonshine for distribution. They were responsible for hiding and transporting the illegal alcohol. The origin of the term varies depending on the stories. One story describes that the term was formed from soldiers hiding bottles of moonshine inside their boots smuggle them into the army camps, while the other states that smugglers used to smuggle flasks of moonshine inside their tall boots to distribute them to others. The term then evolved to also include smugglers that used cars to transport illegal alcohol. The drivers would boost and enhance their cars to escape from the police and federal agents. Bootleggers are also known to give birth to Nascar driving, with the first drivers being bootleggers. The term ‘bootleg’ has evolved to also include other illegal activities such as bootleg recording and bootleg games. In this term it refers to pirated copies of music and games that are acquired from illegal means. 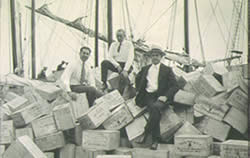 Rumrunners is another term that is used to refer to people that used to illegally transport and distribute alcohol, most commonly moonshine. This was usually done to evade tax and prohibition laws that were placed in a certain jurisdiction. Rum-running was most commonly done on the sea. Rum-running began at the start of Prohibition by a sailor named Captain William S. McCoy, who started smuggling rum from Bimini and the rest of the Bahamas into south Florida through Government Cut. He is credited with developing a convenient way to smuggle liquor by bringing the liquor to the outside waters of the U.S. territory and then selling them to smaller ships, which would then smuggle the goods into U.S. territory. The smaller boats and ships were easier to dock anywhere and could outrun the big Coast Guard ships. Rum and other kinds of liquor were smuggled to all borders of the U.S. from various places including Canada, Bahamas, Europe, etc. Rum-runners still exist today in small groups to avoid paying taxes that are levied on import and sale of alcohol.