Difference between Confidence and Overconfidence 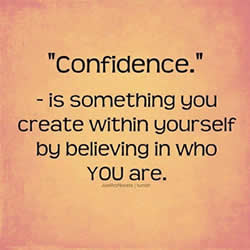 Confidence is described as the state of being sure of one’s abilities. A person is certain that a hypothesis or a prediction is correct or that a chosen course of action is the best or most effective. There are different types of confidence: Confidence in an object, confidence in someone else and self-confidence. Confidence in an object suggests that the person knows the limitations of something’s capabilities and known what that thing can and cannot do. Confidence in someone is having faith and trust one someone’s abilities and nature. Self-confidence is trusting and having faith in one’s own abilities. A confident person must understand himself in order to be confident, he must be sure of his own abilities and understand his own limitations. 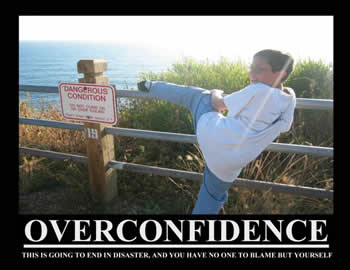 Overconfidence is the overestimation of one’s abilities or the ability of a particular object. An example of this would be a person stating “I’m confident this car will take me across the country.” This results in overconfidence if the car has been continuously breaking down or removing work. Mostly overconfidence is associated with one’s self, where someone believes that they are always right, or incapable of being wrong. “If he can walk across the rope, so can I.” A statement such as this may be considered as a overconfidence statement. Overconfidence often results in trying to make one self seem better than others. Often the person is unable to live up to the promises he/she makes. According to Nofsinger, "People are overconfident. Psychologists have determined that overconfidence causes people to overestimate their knowledge, underestimate risks, and exaggerate their ability to control events.”

Comparison between Confidence and Overconfidence: