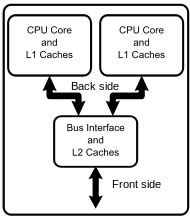 A dual-core processor is a type of a central processing unit (CPU) that has two complete execution cores. Hence, it has the combined power of two processors, their caches and the cache controllers onto a single chip. This makes the dual-core processors well-suited for multitasking.  Dual-core processors have two cores that have an independent interface to the frontside bus. Each core has its own cache. This allows the operating system to have sufficient resources to handle intensive tasks in parallel.

Dual Core is a generic name for any processor with two cores from any manufacture. However, due to marketing and Intel’s predominance in the CPU market, dual core has become synonymous with Intel Pentium Dual Core. It may sometimes also be used to refer to Intel’s Core 2 Duo line. AMD, the main competitor of Intel, also had a dual-core processor under the x2 brand.

Though quad-core is a faster and better technology, it also has some limitations. The true performance of quad-core is often lacking due to external problems. One such problem is heat, each core generates a lot of heat while running, so four cores requires powerful cooling measure such as liquid cooling (which are harder to implant) or to reduce the total speed of the core. This provides a dip in the performance of the cores. Another problem that arises is the hardware, though the processors have been upgraded, the hardware has not yet caught up to the processor. Because of this, during the execution of heavy tasks, the data of the processors could become more congested.

really? three years later this topic is still live. has any of the hardware 'caught up' yet?

Thank you Charles, for pointing out that typo. It has been fixed.

I guess after reading this I will go for Microsoft 950 version and would pass 950XL. I heard somewhere that 950XL has liquid cooling. I think I will be good with 950. Any ideas ?

thnks guys for this informition