Difference between Ethnicity and Religion

Key Difference: Ethnicity is a method of classification based upon a common trait of the population, such as a common heritage, a common culture, a shared language or dialect. On the other hand, a religion is a belief in or the worship a god.

Ethnicity and religion are deeply connected. People of a common ethinic background often group themselves under the same religion, because building a church, synagogue, temple, or mosque helps them to establish their ethnic identity, and community. 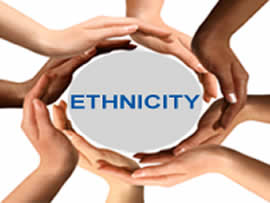 Ethnicity is a method of classification based upon a common trait of the population, such as a common heritage, a common culture, a shared language or dialect. Ethnicity may also be based on common ancestry and religion. Some ethnic groups may be marked by little more than a common name. However, ethnic groups have a consciousness of their common cultural bond. The bond develops because of their unique historical and social experiences. This becomes the basis for the group’s ethnic identity.

Religion is one of the factors that help define culture, and thus ethnicity.While no one definition can completely sum up what religion is, following are some definitions through which we’ll come to know what ‘Religion’ is:

Religion is a man’s interpretation of God. The religious tradition is responsible for the creation of such concepts and practices as Heaven and Hell, Yoga, Ayurveda, Vastu, Jyotish, Yajna, Puja, Tantra, Vedanta, Karma, etc. Religion divides the world because the spiritual man is more concerned about another life and always puts his efforts to get into the right path without pressure from anyone.

Comparison between Ethnicity and Religion: