Difference between Ex gratia and Bonus

Key Difference: Ex gratia refers to the act of donation that is made due to moral obligation rather than any legal requirement, whereas bonus is an added monetary benefit that is usually provided to the employee in order to recognize his contribution or performance.

Oxford Dictionary defines ex gratia as ‘(with reference to payment) done from a sense of moral obligation rather than because of any legal requirement’. It is derived from Latin meaning ‘from favour’.  It is generally used in legal context. It defines the characteristics of voluntary, kindness or grace. It is a sum of money with no attachments of obligation or liability to pay the money. The payment done by this manner is also referred as ex gratia settlement. 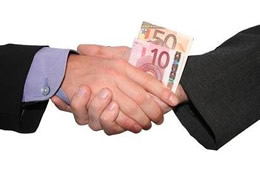 An example of ex gratia payment could be the compensation that may be provided from the government to the victims of natural calamities. In this case, the government does not admit any liability to pay compensation or for causing the event. The payment is made voluntarily to the victims. As the receiver of such payments has no obligations to return the money, the givers also do not recognize any liability or legal obligation. Most of the times, this kind of payment is made due to sheer concerns. In the companies ex-gratia may be given to the employees who are not covered under Bonus Act. Some of the ex-gracia falls in the taxable and some in non-taxable category depending upon the laws.

Wikipedia defines bones as a ‘Performance-related pay aka KARMA is reward paid relating to how well one works’. Thus bonus can be defines as a payment that is made apart from the usual salary and perks. It is mainly associated with the productivity and performance.

For example, if a person gets a fixed salary of 25000 dollars per month and perks worth 1500 dollars, then this is not considered as bonus, due to the fact that this amount is covered under payroll. Now, suppose that the person performs satisfactory in the first year, then he is given 1000 dollars bonus and next year, the same person works really well. Then, in order to encourage the person, the company can raise the bonus amount from 1000 dollars to 1500 dollars. As the bonus was less in the previous years, it shows that the person is rewarded on the basis of his performance.

Lot of criticism has also been associated with determination system of bonus, stating that the patterns that decide the bonus should not be biased. The measures of

performance should be able to reveal the real performance. For example, quantity of work should not be considered as the only factor to decide the bonus. The quality of work should also be given importance in order to judge the performance of any employee. The minimum bonus amount in India varies from 8 percent to 20 percent of wages of employees. The taxation on bonus also varies from country to country. Bonus is not consolidated into normal pay and is also not pensionable. In sales, bonus refers to incentives that are provided on achieving the pre-determined financial objectives.

Bonus acts as an extra reward paid by employers to employees whereas this relationship is not mandatory for ex gratia payments. Ex gratia, generally has no relation with the performance of an individual, whereas bonus has been usually associated with the performance of the individuals. Bonus is a statutory payment under the Act, whereas ex-gratia is completely voluntary.