Difference Between Gopher and Mole

Key Difference: Gophers are mammals that belong to the Sciuridae family. Gopher is an umbrella term that describes a number of species of small borrowing rodents including pocket gopher (also known as true gophers), the ground squirrel, certain species of prairie dog and Richardson's ground squirrel. Moles are also borrowing creatures and belong to Talpidae family. The term ‘mole’ means “{one who throws soil or mud.” Moles are small, round creatures that have short fur, short tail and small eyes and ears (they have very poor eyesight).

Gophers and moles are commonly words that are used when describing backyard or farmland pests. Both of these are borrowing animals, animals that reside in a series of tunnels underground and occasionally visit above ground only to hunt for food. They eat plants, grass and create holes in the landscape. Because they are similar in appearance and are quick, it is hard to distinguish between the two. However, they should be confused from each other as they have distinct differences. 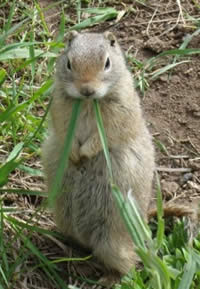 Gophers are mammals that belong to the Sciuridae family. Gopher is an umbrella term that describes a number of species of small borrowing rodents including pocket gopher (also known as true gophers), the ground squirrel, certain species of prairie dog and Richardson's ground squirrel. Gophers are commonly native to western North America. Gophers are small in size ranging from about 4.7 inches to 12 inches, weighing from 0.5 lbs to 2 lbs. They have short tails and small eyes and ears. They have a normal life span of 2-4 years and are found in brown or tan colors, resembling the dirt their reside in.

Pocket gophers earned their name from the pockets they have in their cheeks which makes them have a chubby and puffy face. The pockets are used to store food and carry the food back to gopher borrows. Gophers have strong hindquarters that are used to propel them forward while digging tunnels. They reside below the surface by digging a series of tunnels, allowing them to travel in various places. Gophers come above ground occasionally in order to acquire food. Gophers, depending on their species can be social or solitary creatures. They are known to act as lookout in order to help each other forage for food while above ground. Gophers are also hoarders and they collect large amount of food at their borrows.

Gophers are commonly founded on woodland and grass prairies and prefer moist soil in order to borrow. Their diet includes a range of foods including plants, carrots, lettuce, radishes and other vegetables, along with roots, fruits and certain types of leaves. They love rosebushes. The gophers cut the roots of the plants underground in order to pull plant downwards into the burrow. They create intricate tunnels with large mounds of dirt at the entrance. The tunnels run around 18 inches under the surface, however nesting areas are approximately 5-6 feet below the surface. Gopher holes usually placed at an angle to the ground, which results in crescent or irregular shaped mounds, with plugs. The gophers usually plug their holes after they are done feeding at that particular location.

Baby gophers are born blind and helpless and require the mother gopher’s help. They wean around 40 days and usually hibernate at the beginning of August during their first year of life. Sexual maturity in the young occurs in 6-12 months. Gophers are born in a litter of 3-4 baby gophers, with the mother producing around 2 litters in a year. Gophers become a nuisance for humans as they end up destroying plant life, consuming harvest, garden vegetables, destroying lawn or trees in a forest. The best way to get rid of gophers is to trap them and then give them to animal control or set them lose away from the land. 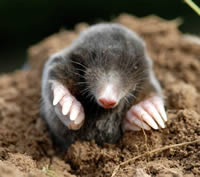 Moles are also borrowing creatures and belong to Talpidae family. The term ‘mole’ was also known as ‘mouldywarp’, derived from German ‘Maulwurf’, Danish ‘muldvarp’, Norwegian ‘mullvad’ and Swedish and Icelandic ‘moldvarpa’. The mold/maul/muld/mull refers to the mold which was mixed in the soil and wurf/varp/vad/varpa means to “throw”, creating “one who throws soil or mud.” The male moles are known as boars, the females are sows and a group of moles is known as labor. Moles are native to North America, Australia, South Africa, Asia, and Europe.

Moles are small, round creatures that have short fur, short tail and small eyes and ears (they have very poor eyesight). They have a pointed snout, in some species shaped like a star, which is very powerful and helps the mole smell for small insects and earthworms. They have long curved claws and have polydactyl forepaws. Polydactyl is a term used to describe mammals that have an extra thumb or finger. Their claws are large and padded to allow them to dig and “swim” through dirt. Studies have also shown that moles can tolerate high levels of carbon dioxide, compared to other animals, because of a unique hemoglobin protein that is present in their blood. This unique protein allows the moles to reuse oxygen and stay underground for longer periods of time. Moles have a life span of 3-6 years.

Moles are found in habitats such as woodland, grassland and farmland. They also prefer lose, moist soil which can sustain insects. Moles also dig underground tunnels and reside underground, coming up occasionally for food and air. There are around 20 different species of moles, of which a few are also aquatic or at least semi-aquatic. Most of these species are similar in appearance and size. Moles are solitary creatures and are extremely territorial. They build their own tunnel systems and are aggressive if another mole enters their territory.

A diet of a mole includes earthworms, small insects, grubs, slug, beetles, larvae, snails, and a range of nuts. Moles have a strong sense of smell that it can use to detect earthworms. Their saliva has a toxin that can paralyze the earthworm, allowing the mole to store their alive prey for later consumption. In order to store their food, moles construct ‘larders’ or small holes. Some moles also consume small mice that linger around their burrow’s entrance.

The large, long and curved claws that are used to dig the tunnels result in mounds at the entrance. The mounds, resemble small curved mountains and are typically symmetrical conical in shape. The mound also has dirt clods, which are a special characteristic of a mole mound. The moles also dig tunnels under the grass and sometimes close to the surface, which can make flowerbeds soft and squishy. The size of the mole mould varies depending on the size of the mole.

Baby moles are born hairless and are blind at birth. Maturation in the young occurs rapidly, with the baby moles weaning from mother’s milk in four to five weeks. Moles are born in a litter of 2-7 moles. Due to their small size, they are preyed upon by creatures such as cats, owls and foxes. Mole holes and mounds are a nuisance to humans as they damage young plants by disturbing the soil, damage the drainage systems and water courses. They can also un-root a plant and cause it to die. The holes and moulds also cause damage to agricultural machinery.

Hi, thanks for the interesting article. But the word borrow is wrong, it should be burrow/burrowing. Cheers