Difference between GPRS and 3G

Key Difference: GPRS service was created as an addition to the GSM network to be able to send and receive data packets. 3G is a faster and a better version of GPRS.

It is always the same with every technology, once one technology is out; developers get started on an upgrade or a better technology. Well, this is what happened to GPRS and 3G. When the cell phone was invented and people could make calls to each other and send text messages, people wanted to be able to send videos, images, or better yet be able to access web pages on their tiny device. This gave birth to GPRS and 3G; these are similar to each other but different from as well. GPRS (General Packet Radio Service) was created as an addition to the GSM network. The GSM standard or (2G) is a replacement for analog cellular networks (1G). GPRS was commercially launched in 2000 as a packet oriented mobile data protocol that allows the network to transmit IP packages to external networks. This service is compatible with 2G and 3G networks. GPRS usage is typically charged based on volume of data transferred, compared to the earlier billed per minute of connected time. The GPRS brought a flow of new features such as multimedia messaging service (MMS), internet access, push to talk services (walkie talkie) and the latest boom of internet applications. 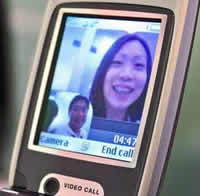 3G is the shorthand for third generation and is used to represent the 3rd generation of mobile telecommunications technology. It is also known as the Tri-Band 3G. This is a set of standards that comply with the International Mobile Telecommunications-2000 (IMT-2000) specifications and are used for mobile devices and mobile telecommunication services. 3G is used for wireless voice telephony, mobile Internet access, fixed wireless Internet access, video calls and mobile TV. It is a step up from 2G and allows users to do more on using their internet technology including sending videos, video conferencing and other features. GSM companies provide 3G under the name of W-CDMA, while CDMA offers it under CDMA2000.

GPRS and CDMA are similar in the sense that they both offer additional features to their basic calling and texting. These two allow the users to access internet and the networks to send and receive IP packets. However, they are also different from each other. GPRS was an addition to the old 2G standards and allowed users to access features such as MMS, internet using WAP, push to talk services, etc. While, 3G offers the users video conferencing, transfer of HD/high quality videos, cloud computing, etc. Another main difference is the speed that is used to transmit the data. While GPRS offered a maximum transfer rate of 114 kbps, 3G can offer a maximum transfer rate of 384 kbps, some can even offer up to 1 mbps. It is believed that in a few years, 2G would become obsolete with 3G taking the main stage. Though, right now it is gaining popularity, it is not compatible with the 2G infrastructure and some countries have not yet upgraded to the new infrastructure.