Key Difference: Male and female box turtles have different characteristics that can be used to tell them apart. The easiest way is to look at the plastron (the underbelly) of the turtle. The male turtle usually has a concave in its plastron that makes it easier for it to climb on the female during mating. If the concave exists then it is a male, in case of a female the plastron will be flat.

It is often confusing to try and distinguish the males from the females in many animals. If a person is not trained, they could often confuse the female for a male or vice-versa. Similarly it is difficult to tell apart the gender of box turtles as their sex organs are inside their shells. Because of this, experts have come up with secondary sex characteristics that can be used to tell the creature’s gender apart. Let’s look at the box turtles in general. 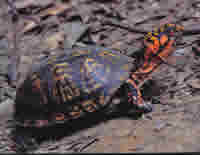 Box turtle belongs to the Kingdom: Animalia, Family: Emydidae and Genus: Terrapene. They are native to North America and can be classified into 12 taxa over four species. Similar to all turtles, box turtles are distinguished using their domed carapaces or shell. According to Wikipdia, all species are domed with a first central scute at an angle of more than 50° while the next central scutes are often flattened. They are also hinged in their plastron (an area between the abdominal and pectoral scales), which they can close tightly in case of threats. Box turtles have a long lifespan that can range between 50 and 100 years. During the early years, the circles on the scutes can help determine the right age of the turtle; however with age, the scales seem to become smooth upon wear making this technique useless during future years. A female box turtle lays 1-7 eggs in one clutch and can lay more than one clutch during a year. Box turtles are omnivores and their diet consists of anything they can catch. It includes insects, earth worms, millipedes as well as vegetation. Predators for box turtles include minks, skunks, raccoons, dogs, rodents, birds and snakes. It may seem difficult to be able to tell the male and female box turtles apart; however it is very simple. There are only a few things that a person must look at to be able to distinguish the gender. Follow these rules: