Difference between Monkey and Baboon

Key Difference: Monkeys are often divided into two broad categories: Old World monkey or a New World monkey. Baboons are Old World monkeys that belong to the genus Papio and are commonly found in African and Arabia. 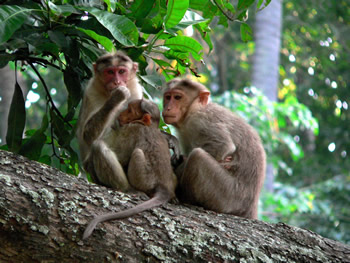 When we simply talk about monkeys, the term is most often refers to the new world monkeys. Hence, the old world monkeys are specified when are spoken about. Monkeys are most commonly arboreal, although there are exceptions such as baboons, who reside on the ground. Monkeys are generally considered to be intelligent. Unlike apes, monkeys usually have tails. Although, this is believed to be a poor distinction as some tailless monkeys (such as the Barbary macaque) is wrongly classified as apes.

Monkeys can range in size with the smallest being 4.6 inches with a 6.8 inches tail, weighing 100 grams to 3.3 feet weighing 36 kilograms. Monkeys have small arms and long legs and opposable thumbs on both their hands and legs, and contrary to popular belief monkeys do not swing as their arms are weak. They are more prone to running on branches and climbing to the top of the treetops.

They also communicate via expressions, vocalizations and body movements. They show affection and make peace by grooming each other. Monkeys posses a smaller brain and have a diet of fruits, vegetables and small insects. 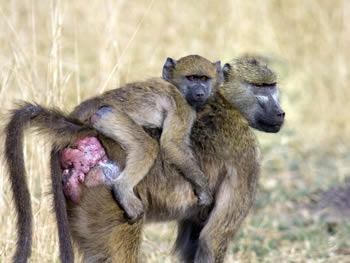 Baboons are Old World monkeys that belong to the genus Papio and are commonly found in African and Arabia. There are five species of baboons and they are some of the largest non-hominoid members of the primate order; only the mandrill and the drill are larger. There is still debate whether the five recognized species are full species or subspecies.

Baboons usually have dog-like muzzles, with sharp canine teeth. They also have close-set eyes for binocular vision, thick fur except on their muzzles, short tails, and rough spots on their protruding buttocks, called ischial callosities. These spots are for providing comfort for sitting. All baboons display sexual dimorphism in terms of size, while some also in color and canine development.

Baboons are ground dwelling and are found in open savannah, open woodland and hills across Africa. They have an omnivorous diet, but much of their diet is filled with vegetables and fruits. They occasionally prey on insects, fish, shellfish, hares, birds, vervet monkeys, and small antelopes. In some areas, they have also been known to prey on sheep and goats from human settlements. They have a life expectancy of 30 years, which can extend to 45 years in captivity.

Baboons are able to acquire orthographic processing skills, which form part of the ability to read. Predators for baboons include humans, the Nile Crocodile, lions, spotted and striped hyena, leopards and cheetahs.