Difference between NAFTA and CAFTA 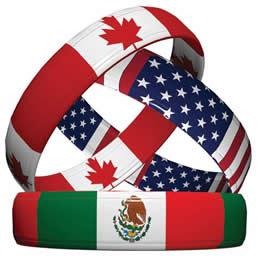 NAFTA and CAFTA are two trade blocs that are playing a controversial role in the 21st century. Trade blocs are often created with the purpose of "comparative advantage," as put forth by British political economist David Ricardo in his 1817 book entitled "On the Principles of Political Economy and Taxation”. The principle of “comparative advantage” states that when a free economy is established, each country or area will ultimately specialize in an activity where it has comparative advantage. It could include natural resources, skilled workers, agriculture-friendly weather, etc.

NAFTA is a trilateral rules-based trade bloc that is signed between North America, Canada and Mexico on January 1, 1994. It was built upon the trade bloc that previously existed between North America and Canada. It has two supplements: the North American Agreement on Environmental Cooperation (NAAEC) and the North American Agreement on Labor Cooperation (NAALC). The main objective of NAFTA is to create a free trade area between the three countries that allows them to share resources and labor, including investing in other countries without having to pay taxes that can be levied on countries that are not part of the pact. Additionally, it also seeks to eliminate non-tariff trade barriers and to protect the intellectual property right of the products.

The major criticism that NAFTA has received is because of the agreement between two developed countries and one developing country, it has resulted an unequal amount of resource and monetary distribution. Also, production is now being outsourced to make it cheaper, resulting in losses for the developed countries. In Agriculture, three separate agreements were signed between each pair of parties. The Canada–U.S. agreement contains significant restrictions and tariff quotas on agricultural products (mainly sugar, dairy, and poultry products), whereas the Mexico–U.S. pact allows for a wider liberalization within a framework of phase-out periods (it was the first North–South FTA on agriculture to be signed). 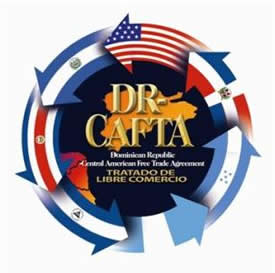 CAFTA or Central America Free Trade Agreement is now known as CAFTA-DR, following the addition of Dominican Republic to the pact. This agreement is a treaty under international law, but not under the U.S. law. The agreement is signed between the United States and the Central American countries of Costa Rica, El Salvador, Guatemala, Honduras, Nicaragua and Dominican Republic. The trade agreement is based on the NAFTA and is seen as a stepping stone to establishing a Free Trade Area of the Americas (FTAA) agreement.

The purpose of creating CAFTA-DR was to create economic opportunities by opening markets, eliminating tariffs, reducing barriers to services, and more. The Department of Commerce stated that, "More than 80 percent of U.S. exports of consumer and industrial goods will become duty-free in Central America (Costa Rica, El Salvador, Guatemala, Honduras and Nicaragua and the Dominican Republic) immediately, with remaining tariffs phased out over 10 years.”

The supporters of the CAFTA trade agreement state arguments such as the agreement increases sales and profits for U.S. businesses, resulting in the strengthening of the economy. It creates more middle-class jobs and that it provides opportunity for the U.S. to provide financial help to some of the world's poorest countries. The opposing side that does not support the trade agreement states that free trade is resulting in lower labor abroad causing many companies to outsource their labor and loss of jobs in the United States. It is also resulting in exploitation of the workers in the other countries, along with environmental degradation in developing countries.

Although, being quite similar in nature and the CAFTA being designed after the NAFTA, there are many differences when it comes to policies and the clauses that are added in the two different agreements. One gaping difference is mostly that NAFTA pertains to only North America, Canada and Mexico, while CAFTA is an agreement between U.S. and Costa Rica, El Salvador, Guatemala, Honduras, Nicaragua and Dominican Republic.

Comparison between NAFTA and CAFTA: