The name Aurora is the name of the Roman goddess of dawn. As the lights look like approaching dawn, they were named after the goddess of dawn. The name Borealis is the Greek name for the north wind, hence denoting that it occurs in the north, while the name Australis is the Latin word meaning ‘of the South’ or ‘Southern’.

While, the Northern Lights and Southern Lights appear to be nature’s miracles, there is a very straightforward and scientific reasoning for the aurora. The Aurora occurs when cosmic rays, solar wind and magnetospheric plasma interact with the upper atmosphere.

In layman’s terms, the sun is known for its sunspots. During these sunspots, the sun expels solar matter, also known as solar plasma or solar winds into the universe. Some of these solar winds make it to Earth. However, these winds are the temperature of the sun, which is over a thousand times hotter than the Earth and the matter travels at very fast speeds. Hence, to protect the planet, the Earth’s atmosphere, which is primarily made up of oxygen and nitrogen atoms, absorbs the heat from the solar wind when the particles collide with the oxygen and nitrogen atoms. This impact and the heat put the atoms in an excited state. When these atoms come back to their normal state, they release the excessive energy in the form of visible photons. These photons are what we see and name as the Northern Lights and Southern Lights. 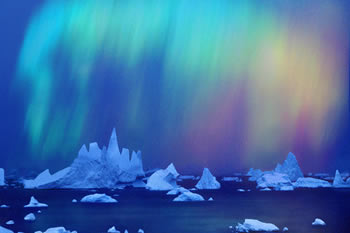 What’s surprising is that the Aurora phenomenon is not exclusive to Earth. The lights can be seen on any and all planets that have magnetic poles. In fact, similar to Earth, these auroras come in a myriad of different colors, such as but not limited to red, green, yellow, pink, purple, blue, as well as ultraviolet and infrared, which are not visible to the naked eye. These colors occur depending on the atoms that are releasing the photons. The most common is the green aurora, which is due to the participation of the oxygen atom.