Difference between Octopus and Jellyfish

Key Difference: Octopus and Jellyfish are both invertebrates. Octopus belongs to the group of cephalopods. Cephalopod means feet around the head. Jellyfish belongs to the Phylum Cnidaria and Class Scyphozoa. Both differ in many aspects like anatomy, diet, etc. Unlike an octopus, a jellyfish does not have any heart, brain or blood. 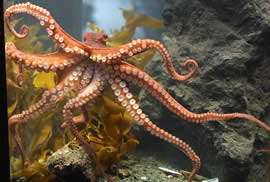 An octopus is an aquatic animal which belongs to the group of cephalopods of Phylum Mollusca. Cephalopod means feet around the head. Octopuses belong to the family Octopodidae and group Octopoda. The most apparent characteristic of an octopus is its eight arms which usually bear suction cups. They do not have a protective outer shell. It contains a beak which is the only hard part present in the body of the octopus.

They have  a short life span; for some species it even ranges to only six months. Octopus has three hearts. Due to the presence of copper rich protein hemocyanin present in the blood of the octopus, it is of blue color. An octopus defends itself by using mechanisms like ink sacs, camouflage and automising limbs. They are considered to be of high intelligence than any of the other invertebrates. The mobility of octopus is defined by crawling and swimming types of motions. 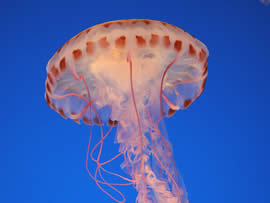 Jellyfish belongs to the Phylum Cnidaria and Class Scyphozoa. Jellyfish (Jellies or sea jellies) are the ones which are found floating freely in the oceans. They are usually transparent. They do not contain any bones. They vary in shapes and sizes. Most of the people consider it to be a fish due to its name, however it is not a fish. It belongs to a group of its own which is different from other animals. They lack backbones, heart, blood, brain, or gills.

The body of jellyfish is composed of mesoglea which is a non- living jellyfish substance.  This body is coated by a layer of skin. Body of jellyfish is mainly composed of water, which tends to form around 90 percent of its body. They also have tentacles placed around their mouths. These are used for getting hold of prey. It is a carnivorous animal. Jellyfish and Octopus are different in many ways. Unlike an octopus, a jellyfish does not have any heart, brain or blood. Jellyfish are carnivores, whereas Octopus are omnivores.

Comparison between Octopus and Jellyfish: