Key Difference: Pinterest is a photo and video sharing social media website that is based on the virtual pinboard style. It was founded by Ben Silbermann, Paul Sciarra, and Evan Sharp in 2010. Instagram is a free photo sharing online service that was developed by Kevin Systrom and Mike Krieger. In April 2012, Facebook acquired Instagram. Unlike Pinterest, Instagram only allows images that are uploaded from a mobile device. 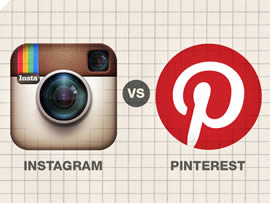 Instagram can be described as a social media network that is built around photos. It is widely popular with people who love to click photos with their phones, and want to share these pictures with friends and family. It is a free phone app which enables photo sharing, video sharing and social networking. It also provides the feature of applying digital filters. One can easily share pictures and videos on various social networking services such as Facebook, Twitter, Tumblr, Flickr, etc. One can also find his ”friends”, and  ”Like” or “”Comment” on the photos.

Instagram was created by Kevin Systrom and Mike Krieger and got launched in October 2010. Google Play and Apple App Store are distributors of the Instagram. Initially, it supported only iPhone, iPad and iPod Touch, but later Android camera phones were also added to the list. In April 2012, Facebook acquired Instagram. It can also be termed as a nifty Smartphone app (only available on Apple or Android mobile devices). Instagram has strict Terms of Use and Community Guidelines for defining attributes like minimum age of an user.

Pinterest is a photo and video sharing social media website that is based on a virtual pinboard style. It enables the users to create and manage theme based image collections like events and hobbies. Users can simply browse other user's images and also re-pin, i.e. add them on their own boards. The site was founded by Ben Silbermann, Paul Sciarra, and Evan Sharp. A board defines an area where the user’s pins are located. One can pin an image by uploading it or by providing an URL of an image. It also provides the opportunity for the online promotion of a business. The site is recorded to be more popular among women in comparison to men. It has been mostly designed for the desktop, but an app is also available for the same. Pinterest can be termed as a curator of images and videos. Unlike Instagram, Pinterest is generally not used for sharing personal pics.