Difference between Pokémon X and Y

Key Difference:  Pokémon games are commonly released as a set of two slightly different titles, and X and Y are no different. They’re basically the same game. However, Pokémon X and Pokémon Y have a variety of Pokémon that can only be obtained within each of the specific games. Pokémon X and Pokémon Y are the 6th Generation primary paired version games. The games are available on the Nintendo 3DS. The games take place in the new Kalos region. The game was mainly released on January 8, 2013 by Satoru Iwata through Nintendo Direct at 8 pm JST. The games were released in 7 different languages - Japanese, English, German, Spanish, French, Italian, and Korean.

The key differences between Pokémon X and Y are legendaries and mega evolutions. Pokémon X features the stag-like Xerneas, which is a pure Fairy-type Pokémon. Pokémon Y, meanwhile, stars the Dark / Flying-type Yvelta. Without giving away too much, both legendaries do end up having an impact on the story, so it's a matter of preference as to which one you want to see. 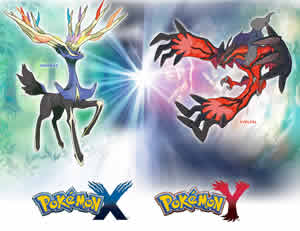 Let us differentiate between the both – Pokémon X and Y versions in detail.

The differences: Mega Mewtwo Y increases its special attack significantly and gains the "insomnia" ability—as it suggests, this ability prevents Mewtwo from falling asleep. Mega Mewtwo X, meanwhile, becomes a psychic/fighting type, and its attack stat increases. In addition, it also gains the "steadfast" ability, which increases its speed whenever it flinches in battle.

Comparison between Pokémon X and Y: