Difference between Rabbit and Bunny

Key Difference: There is actually no difference between a rabbit and a bunny. Bunny is just another name for a rabbit.

There is actually no difference between a rabbit and a bunny. These are just two different names for the same creature. The name bunny has been derived from the old name ‘conyies’ that was used to call rabbits in the 18th century. Rabbit babies have been dubbed the name ‘bunny’ due to popularity. 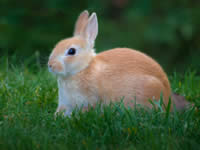 Rabbits or bunnies belong to the Leporidae family of the Lagomorpha order. There are eight different genera in the family classified as rabbits. Scientifically, the male rabbit is called a buck, the female is a doe and the babies are known as a kit or kitten. Originally rabbits were classified together with rodents and were later separated due to predominant opinion that many of their similarities were a result of convergent evolution. However, recent DNA analysis of both the species shows that they share a common ancestry.

Rabbit are commonly found in habitats such as meadows, woods, forests, grasslands, deserts and wetlands. They also live in small groups in burrows, underground. The only rabbit species that do not reside underground is cottontail rabbits. Rabbits are native to North America, southwestern Europe, Southeast Asia, Sumatra, some islands of Japan, and in parts of Africa and South America.

The rabbits have an egg shaped body and have long ears (approximately 4 inches long) in order to hear for predators. They also have large, powerful hind legs in order to hop; the two front paws have 5 toes, the extra called the dewclaw. The hind feet have 4 toes. They have soft fur and can be found in colors such as white, brown, black and gray. They have a small round ball of fur for a tail.

The rabbit’s diet includes feeding on grass, forbs, and leafy weeds as they are herbivores. The diet of a rabbit consists largely of cellulose, which is hard for them to digest, which is extracted in the form of feces. Rabbits produce two kinds of feces, hard droppings and soft black viscous pellets. They then consume the soft black pellets in order to extract further nutrients. Rabbits also have a fast reproduction rate. An average litter includes anywhere from 4 to 12 babies. Since the breeding season for a rabbit lasts for nine months, a female rabbit can give birth to as many as 800 children, grandchildren, and great-grandchildren in one season. The lifespan of rabbit is about 9–12 years. Rabbits are also cultivated for their meat in certain countries.

The word bunny was made popular for rabbits by the Easter Bunny, even though rabbits do not lay eggs and by Disney’s popular cartoon character, Bugs Bunny. These two popular cultural references also gave birth to the name bunny for the rabbit.