Difference between RAM and ROM

Key difference: RAM is volatile and used for both read and write. ROM is non-volatile and only used for reading. Memory on the RAM is erased when the computer is switched off.

Both Random-Access Memory (RAM) and Read-Only Memory (ROM) are primary storage devices used in electronics, most commonly in computers. Primary data storage devices store data that is required by the computer to execute operations. RAM is a part of hardware that stores operating system’s application programs and currently running processes. ROM, on the other hand, stores critical programs which are used for the basic computer commands, such as start-up. Both types of memory allow random access, so in order to be precise, RAM should be referred to as read/write RAM and ROM as read-only RAM. The comparison between RAM and ROM is as follows: 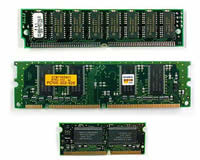 ROM: Read-Only Memory is a type of non-volatile storage system in a PC. Every computer comes fitted with this memory that holds instructions for starting up the computer. ROM stores critical programs, such as the program that boots the computer and performs diagnostics. Data stored in ROM cannot be easily rewritten or modified. This data is also not lost when the computer is powered down. However, ROMs operate at a much slower speed that RAM. In addition to computer, ROMs are also used in calculators and peripheral devices such as laser printers, in which ROM stores the fonts.