Difference between Skydiving and Paragliding

Key difference: The equipment used in paragliding and skydiving are the same, but they are used in different forms. Skydiving involves jumping, with a parachute, from an airplane, while Paragliding is practiced using an engine-free aircraft.

Both, skydiving and paragliding are extremely different sports.

In early 1797, Andre Jacques Garnerin jumped from a hot air balloon with a parachute, and marked the first incident of the true modern skydiving. Following the incident, skydiving was refined throughout the 1800s. Even the militaries adopted this activity as a sport in the 1900s. Its roots were actually found in the medieval times. 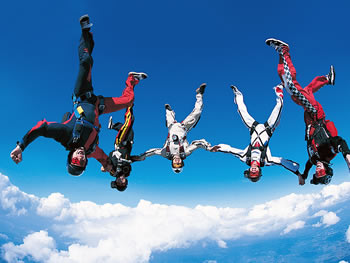 Skydiving is performed as an assortment of aerial maneuvers and stunts, like the acrobatics before deploying from a parachute. People having different levels of physical fitness participate in skydiving. It’s a sport in which the participants jump or fall from the aircrafts at the desired high altitudes. It is considered as a terrifying and exhilarating type of sport. The parachute used in skydiving slows the descent and allows the skydiver to land gently on Earth. Normally, it is performed in two ways: individually and in groups.

Numerous companies around the world offer opportunities for skydiving. It is performed in two main steps, which involve the actual freefall and the canopy flight phase. The actual free fall can be of long or short duration, which ends when a pilot chute deploys and pulls the parachute out from the container. Once the parachute is pulled out, the freefall finishes and the canopy flight phase begins, which ends with the landing. It is found that the skydivers regularly check their gear to ensure its good shape, and many of them also carry a backup parachute. Sometimes it is also found that the backup deploys automatically when a skydiver reaches a certain altitude. So this states that both the primary and backup parachutes have to be controlled with the steering lines, allowing the skydiver to control his/her descent. 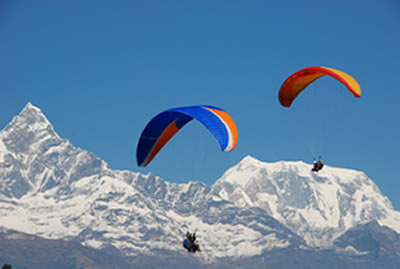 In 1952, Domina Jalbert concluded that the advanced governable gliding parachutes of multi-cells and with controls for lateral glide can be used for flights in paragliding. Today, these are the most common types of glides used.

Paragliding is considered unique among the other soaring aircrafts. It is easily portable. It is a recreational, competitive and adventurous sport involving the flight of a paraglider. The paraglider is a lightweight, free-flying, foot-launched glider aircraft, with no rigid primary structure. Its complete equipment pack is in a rucksack, generally carried easily on a pilot's back, in a car, or on a public transport. Paragliding, when compared with the other air sports, simplifies the take off technique while traveling and also suitably selects the landing place. There is no use of any engine in its flight. Its flight lasts for many hours and covers hundreds of kilometers. Their flights are considered to be different from other air sports flights, that is, the distance of some tens of kilometers can be covered in 1–2 hours.

Comparison between Skydiving and Paragliding: