Key difference: As the name suggests, Soybean oil is extracted from soybean seeds; and the whole Vegetable oils are oils obtained from different types of plant sources. These various types of oils and their properties, share a big part in food and health sciences.

Oil is a chemical substance, which is in general viscous in nature. These are available in several varieties; and have great applications in cooking and other related fields. Oils play a major role among the basic ingredients of food. These have some amount of fat concentration in them; according to which they are preferred in making of food and other cooking techniques.

The highlights over here are traced on soybean and vegetable oils; which are different in their properties and concentrations. The major inter-relation among these oils is; Soybean oil obtained from soybean seeds,is a type of vegetable oils; while vegetable oils are gained from various plant or herb sources like seeds, nuts, legumes and fruits. These oils have their own importance and applications in their respective fields. 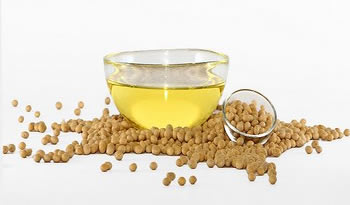 Soybean oil is considered to be the most consumed form of vegetable oils. The edible oil is obtained from soybean (scientifically, Glycine max) seeds; and is rich in oxidation-prone linolenic acid. Along with it, the clean and natural oil is also a rich source of proteins. It is high in poly- and monounsaturated fats, low in saturated fats and trans fat-free.

The versatility of the oil is that it has an imperceptible odor support which enhances the natural flavors of prepared foods. Also, the oil has a little flavor which proves to be an advantage; as it does not interfere with the taste of the food. It is frequently used in mayonnaise, salad dressings, frozen foods, imitation dairy and meat products and commercially baked goods. The oil is also used in shortening purposes in the old-fashioned pie crust or blended with a flavored vinegar for a new dressing, as the oil’s natural flavor gets adapted to the one in which it is used. Soybean oil is processed to form drying oil, which is further used in the applications of printing inks (soy ink) and oil paints. 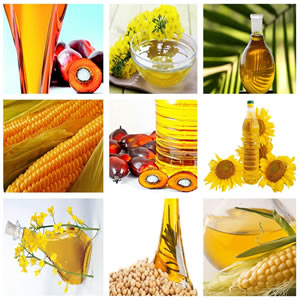 Vegetable oils have been a part of human consumption from historical eras. In general, it is a triglyceride obtained from plant sources like seeds, nuts and fruits. The term “vegetable oil” specifically refer to those substances that are liquid at room temperatures or in general, also refers to the state of matter of the substance at a given temperature. Hence, these are solid at room temperature and like usual other oils, liquefy when heated. There are varieties of vegetable oils available in the market, out of which the most common are; rapeseed (canola oil), soybean, corn, sunflower, safflower, peanut, etc. These oils are obtained by different process of extractions.

Vegetable oils generally are tasteless; due to which they are preferred mostly in cooking and baking. In more elaborate terms, these oils overshadow the respective food’s flavor, in which they are used. Along with cooking, the oils are also used in soaps, skin products, candles, perfumes, personal care and cosmetic products. There are issues of toxic and non-toxic nature of vegetable oils; while selecting any type of oils; hence at times these are not preferred for some duration and climatic conditions.

In comparison, Soybean oil is regarded to be one among the several Vegetable oils. Hence, it imparts the common property of adapting to the common food item tastes and flavors in which they are used in cooking. Both these oils have high degree applications in their relevant domestic and industrial purposes. One major difference between soybean and vegetable oils are their type of classification, i.e the vegetable oils are classified according to their source and types, while soybean oil is one among these classifications.

Did you actually say up there that butter and ghee are vegetable oils? That is incorrect. Butter and ghee (which is just a type of clarified butter), are secreted by animals. Also, "vegetable oil" is a general term for any oils that come from plants (rather than animals), while soybean oil specifically comes from soybeans. Oddly, though, every single bottle of oil at the grocery store that is labeled only as "vegetable oil" lists soybean oil as its only ingredient. Everything else is labeled as what it is: corn oil, sunflower oil, olive oil, canola oil, peanut oil, etc. etc. Only soybean oil does not say "soybean oil" on the front label; it is called "vegetable oil," but if you look at the ingredients it is soybean oil.

Hi Jen, thank you for pointing that out. It has been rectified now.

I don't care how you try to spin it...old-fashioned vegetable oil is better than soybean oil....this crap on the market today won't brown, won't drain and tastes like garbage...30 mins later soybean oil congeals in the skillet or deep-fryer....and just try to wash that pan...the water will have to be hard running, hot and you should invest in Dawn detergent stock !