Difference between Stalactite and Stalagmite 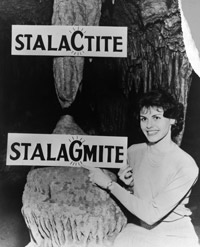 The terms stalactite and stalagmite are two terms that are often confusing for many people because of their similarities. Although, they are very similar in composition, they differ in placement; one of them grows down from the ceiling, while the other one protrudes from the floor.

Stalactite and Stalagmite are found in caves, most commonly limestone ones. These are very important in geographical studies and have been helping date back rocks and minerals. These two are very sought after by explorers. An example from HowStuffWorks helps understand why it is important to understand the difference between the two. Two explorers are searching a dark cave taking minerals for research. They come to an area that has not yet been discovered by any human. They are careful not to touch anything to ensure not contaminating the area. One explorer, admiring the beauty of rocks and glittering mineral, absent-mindedly takes a step. The other explorer yells, “Watch out for that stalagmite!” The first explorer looks up, but makes a mistake confusing a stalagmite and a stalactite; he stakes a step and breaks the stalagmite on the floor. He ends up contaminating the area, which could alter the results. Hence, it is important to understand the differences between the two.

Stalactites and stalagmites are derived from the Greek word ‘stalassein’, meaning “to drip.” This is because they are commonly wet and have water dripping from it. Both of these structures are composed of calcite. Calcite is made up of calcium and carbonate ions and are known as calcium carbonate.  When water falls over a cave, it trickles through rocks and picks up sediments from limestone and carbon dioxide. A combination of calcium carbonate, carbon dioxide and water results in a mineral known as calcium bicarbonate.  The calcium bicarbonate gets into the rocks and drips through the roof of the cave, leaving behind calcite deposits. The deposits then continue to create a stalactite. The stalactite then drips the water on the ground, where the dripping water leaves behind calcite deposits on the ground. These deposits keep piling on top of each other and result in mounds emerging from the ground, creating stalagmites. Stalactites and stalagmites takes centuries to make.

fine article,it is useful to me and others,please just keep it....