Difference between Virus and Malware

Key Difference: Viruses are programs or codes that attach themselves to files and programs and run inside the computer without the knowledge of the user. Malware, short for malicious software, is an umbrella term that incorporates all kinds of software or programs that can be used to disrupt normal computing capabilities. 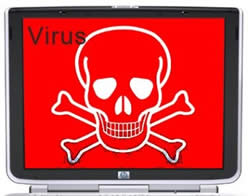 The moment a computer starts acting weird and crashes or stops running certain applications, automatically people assume that it is a virus, worm or a certain type of malware. Viruses and malware are dangerous software that work to affect the computer’s software as well as collect sensitive data. Initially, viruses and malware were created as a joke or a prank; however, when people realized that they could use these software to attain private data from a computer as well as spam the computer and hinder its performance, they started using these software for illegal activities. Many people often confuse these two terms as they seem similar in nature. However, malware is practically an umbrella term that includes all kinds of malicious programs and codes.

Viruses are programs or codes that attach themselves to files and programs and run inside the computer without the knowledge of the user. The term ‘virus’ has become an umbrella term for all types of malware, which have the ability to replicate itself and does not include adware and spyware. Viruses have been termed as virus because of their characters that are similar to actual viruses. They can attach to a certain hosts, files and programs and then replicate themselves to completely infect the computer. They can also travel via transference of data and files to infect other systems. All computer viruses are man-made. Almost all viruses are attached to an executable files, which requires the user to run the file in order for the virus to infect the system.

There are two types of viruses: Nonresident and Resident. Nonresident viruses, upon execution, immediately start searching for other hosts that can be infected, infect those targets, and finally transfer control to the application program they infected. Resident viruses do not immediately search for hosts and instead loads itself into memory on execution and transfers control to the host program. The main purpose of a virus to infect, alter and damage files. These can also change the name and location of the files and corrupt them to the point that they become unreadable. Computers can be protected by using antivirus and spyware software. In order to remove the virus, infected files can be deleted or the computer can be formatted or restored. 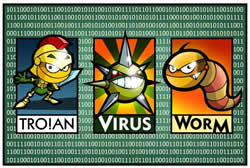 In short, malware is the generic term for any type of malicious software that exists, including virus. Virus is a type of malware that infects executable systems and causes them to stop working or crash.