Sandwich is a popular food item which is made by placing a filling between two or more pieces slices of bread. According to food storians sandwich was invented by a cook of John Montagu, 4th Earl of Sandwich. There are many different types of bread which can be used for making a sandwich. Another simple ingredient of a sandwich is spread like butter or cheese spread. It creates a moist barrier between bread and the filling. There are different choices in case of fillings too like pork, ham, eggs, creamed cheese, etc. Fillings provide the dominant flavor to the sandwich.

There are many different types of sandwiches depending upon the selection of bread and filling. Some of the popular sandwiches are – 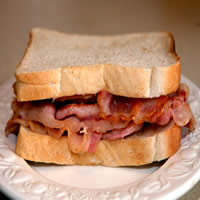 Bacon sandwich – This sandwich is also known as bacon butty or bacon sarnie. In this sandwich the filling is made from cooked bacon. It usually uses butter or margarine for spread. It is supposed to be originated in United Kingdom. Bacon, egg and cheese sandwich is a variation of this sandwich in which fried or scrambled eggs are also used in the filling. 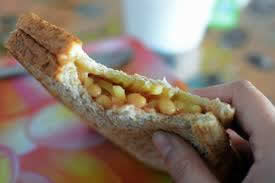 Baked Bean sandwich – It makes use of baked beans for the filling. It is popular especially among the students as it is quick and easy to prepare. The recipe emerged in a book known as 'Cooking for Two' by Janet Mchenzie around 1909. It has been originated in United States. 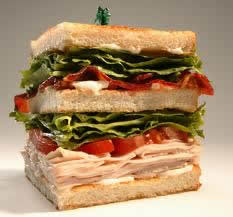 Club Sandwich – It is also known as clubhouse sandwich. It usually makes use of three slices of toasted bread which are interlaid with pieces of chicken or turkey and bacon or ham. It also contains ingredients like lettuce, tomato and mayonnaise which provide some extra character to the sandwich. It is supposed to be originated in America. Due to usage of three slices, it is also known as triple decker or three decker sandwich. Barbeque Sandwich – This sandwich from United States is made from barbequed meats. There are numerous options to choose from for the meat. In some of the barbeque sandwiches, instead of used barbequed meats, barbecue sauce is used. Bauru – This sandwich comes from Brazil. It makes use of roast beef in the filling. Tomatoes and pickles are also added with melted mozzarella cheese in its filling. The bun which is used in this sandwich is a toasted Portuguese style bun. It has been around since 1934 and since then it very famous as a traditional Brazilian sandwich. 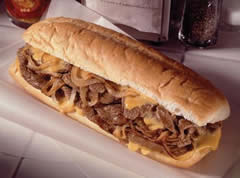 Cheesesteak – It is also known as Philly cheesesteak or Philadelphia cheesesteak. It makes use of chipped steak for the filling. The steak is frozen and then sliced really thin and then it is cooked on a grill top. In case cheese is absent from the sandwich, it is known as only steak. The rolls used for this sandwich are long and thin. Falafel – This comes from the Middle East part of the word. They make use of a filling made with chick peas or with the combination of fava beans and chick peas cutlets. The cutlets  are fried and then kept in between the pita bread. It is usually served with tahini sauce or mint chutney.

Hamburger – Initially, these sandwiches were made from the beef from German hamburg cows, and that is why they got their names hamburgers. They are an important part of American cuisine today and are highly popular in the world. Beef patty for the filling is seasoned nicely which provides a juicy flavor to it. Mortadella – This sandwich is made by mortadella. Mortadella is an Italian sausage which is made from pork which is grounded and then mashed into a paste. It may also contain other ingredients like myrtle betties and coriander. Sourdough bread is preferred for its preparation. Ice Cream Sandwich – It is different from the regular sandwiches as is a sweet frozen food item. It is prepared by putting a layer of ice cream between two biscuits, cookies or slices of cake. This sandwich originated in United States. Usually, Vanilla ice cream is placed between chocolate slices of cakes for this sandwich. Gatsby – This sandwich comes from South Africa. It is just like an American hoagie. The filling is made from combining thick French fries with an Indian style curried pickle. It has gone through many stages of transitions where the filling is prepared by using ingredients like fried fish, chicken, calamari, etc. Fries and a spicy sauce is must for preparing it.

There are many other types of sandwiches too. These sandwiches are generally differentiated on the basis of their filling and usually they are named after the core component of the filling. There are numerous varieties of sandwiches in the world.