Difference between 2D and 3D

The term 2D and 3D are used to indicate dimensions. A dimension is ‘any measurable spatial extent, such as length, breadth, height, depth, width, thickness, etc.’ Essentially, dimension indicates any and all sides of an object, such as height and width, and allows us to measure them.

The term 2D stands for Two-Dimensional, whereas 3D stands for Three-Dimensional. 2D represents an object in just two dimensions, while 3D represents it in three dimensions. It is best to think of it with an example. A car has three dimensions. In fact, everything in our reality is three-dimensional. It has length, width, and height; however a photograph of a car or a drawing of a car has only two dimensions. In the photo or drawing, one can only see and measure length and height, whereas the depth or width is indistinguishable.

In mathematics and physics, 2D is defined as having two axes to plot, usually the x-axis and y-axis. These axes are indicative of two aspects on the same plane, which can be plotted on the Cartesian coordinate system. Similarly, 3D indicates three aspects, which are plotted on the x-axis, y-axis and the z-axis. 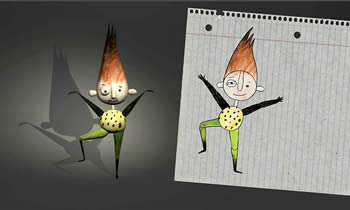 When referring to geometry, a line drawn on a on a sheet of paper is 1D, which means that it only has aspect that is length. Whereas, shapes such as rectangle, square, triangle, polygon, etc., are 2D, which means that they have two aspects, height and length. While, shapes like cylinder, sphere, cube, pyramid, prism, etc., are considered to be 3D as the have height, length, and a third aspect, that is depth.

Additionally, the terms 2D and 3D are also often used to refer to graphic image technology, such as photography, animation, computer graphics. 3D movies are all the rage these days. These represent characters and events in the movies as three-dimensional, which is more like how we would perceive real life, rather than the traditional flat images of 2D.

Comparison between 2D and 3D:

Like Tae, I also would like to cite this article, however, to let it be an authorized literature source I do need the name of the author instead of using the websites name. I would really like it if you could provide me with the author's name! Thanks in advance

I would like to cite this article.....could I have your name please and date published

Hi Tae, I'm glad you found our article useful. To cite the article please use the website name, Difference Between in place of author, and the date you viewed the article as the date published. For more information check our citation page, http://www.differencebetween.info/citation. Good Luck!