Difference between a Crockpot and a Slow Cooker

Key Difference: A slow cooker is a type of electric cooker that cooks food by simmering it on low heat. It is not uncommon to run a slow cooker for about 5 hours or even more. This makes is ideal for pot roast, soups, stews, as well as other dishes including beverages, desserts, and dips. a Crockpot is a brand of Slow Cooker. 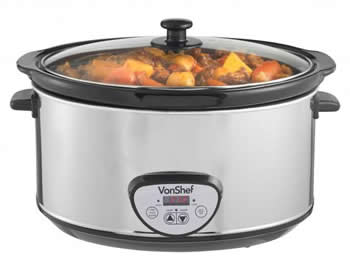 The terms crockpot and slow cooker are often used interchangeably, however, there is a difference between the two terms. However, the difference is so slight that most people either don’t realize it or don’t care altogether.

A slow cooker is a type of electric cooker that cooks food by simmering it on low heat. It is not uncommon to run a slow cooker for about 5 hours or even more. The idea behind the slow cooker was to be able to cook dishes that normally took a long time to cook on the stove on in the oven, but as they are on heat, they couldn’t be leave unattended for long, something that is not a problem with a slow cooker as it typically comes with a temperature regulator. This makes is ideal for pot roast, soups, stews, as well as other dishes including beverages, desserts, and dips.

In addition to a temperature regulator, most types of slow cooker also include a pot, a lid, and a heating source. The pot is typically made from ceramic or porcelain, but may be made from other materials as well, such as metal, depending on the manufacturer’s choice.  The first commercial slow cooker was introduced by Naxon Utilities Corporation of Chicago. Irving Naxon, the owner at the time, got the idea from his grandmother when she spoke of a stew called cholent which her mother made back in her native Lithuanian town and which took several hours to cook in an oven. The slow cooker gained major popularity in the 1970s when women actively started working outside of home.

The term crock originally started out as a brand name of a slow cooker made by the Industrial Radiant Heat Corp. of Gladstone, NJ. In 1950, they started selling the "Simmer Crock." The term crock refers to a ceramic pot which typically acts as the primary container for the cooker. Eventually, Radiant Heat Corp. bought out Naxon Utilities Corporation and become the only one selling a slow cooker, i.e. a crock pot. Hence, the term crockpot can be synonymous with a slow cooker. the term took off, and even though now there are many company’s manufacturing and marketing their own slow cookers, the name has stuck and many people still refer to slow cooker as a crockpot regardless of the company or its real name. 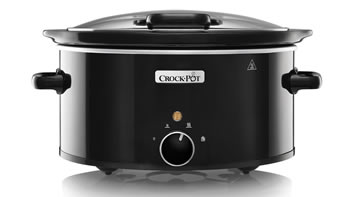 Other than that, there is one more difference between them. A pot of a slow cooker can be made from ceramic, porcelain, or even from various metals, though typically it will be stainless steel or aluminum. However, for most variants of a Crock-pot, the pot is made from ceramic.

Hence, it can be said that while all crockpots are slow cookers, not all slow cookers are crockpots. a Crock-pot is accurately a brand name for a type of slow cookers. However, in common parlance both terms are used interchangeable and most people don’t even know the difference.

Comparison between Crockpot and Slow Cooker: